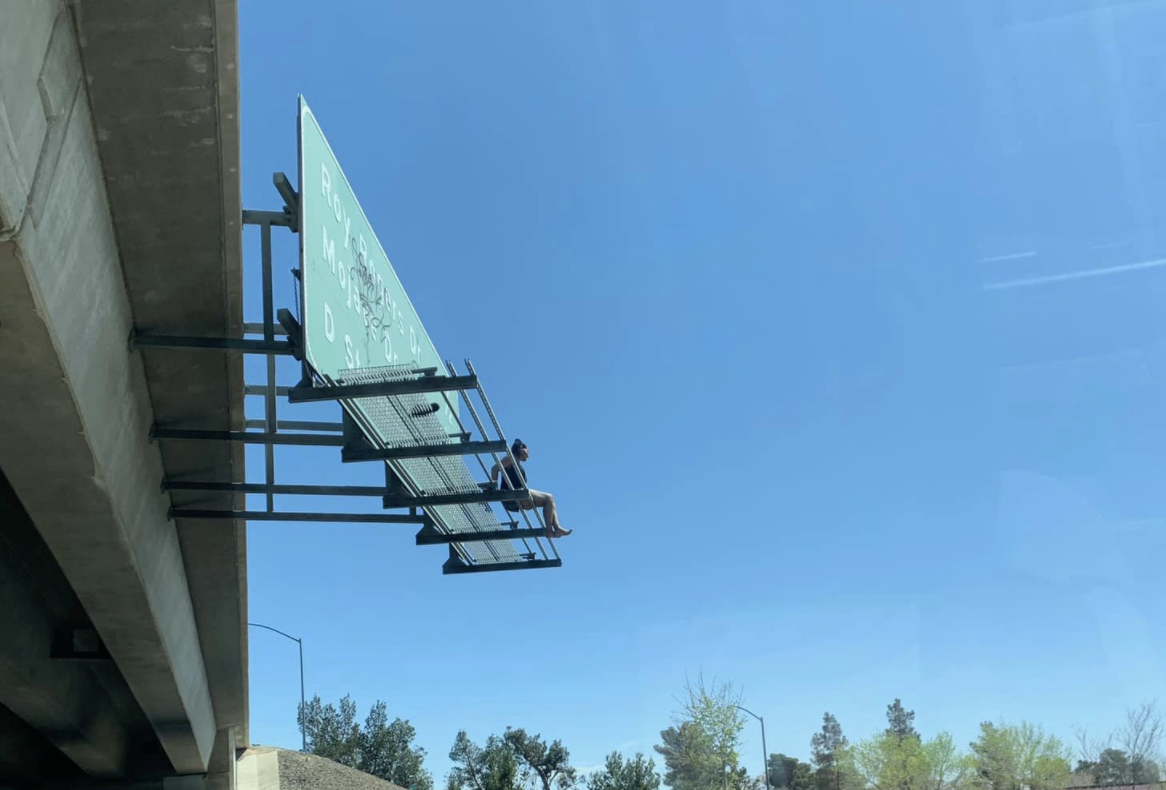 UPDATE @ 2:55 PM — VVNG received additional information from the Victorville California Highway Patrol regarding the incident that prompted a complete closure of the northbound I-15 freeway.

CHP said that at about 11:14 am, officers responded to reports of a female pedestrian standing on the right shoulder of the I-15 at Palmdale Road.

“As an officer was going to make contact with the pedestrian, she ran up the embankment onto the overcrossing where she went over the fencing and onto the sign,” stated CHP officer Mike Mumford.

Multiple agencies responded and attempted to talk to the female as she appeared in distress.

“Ultimately, the female attempted to climb down a firetruck ladder that was placed on the overcrossing before letting go of the ladder, falling to the inflated bags located on the freeway,” stated Mumford.

The female, a 40-year-old resident of Apple Valley was uninjured and was transported to Victor Valley Hospital as a precaution before she will be placed on a 72-hour hold for a medical evaluation.

UPDATE 12:44 PM — The victim was reported to be down on the ground.

UPDATE 12:41 PM — A firefighter climbed up to the ladder and made contact with the woman.

UPDATE 12:39 PM — The fire department extended a ladder up to the woman and she briefly climbed onto it before walking back off.

UPDATE 12:20 PM — The woman has removed all of her clothing and remains on the overpass sign refusing to come down.

VICTORVILLE, Calif. (VVNG.com) — A woman threatening to jump onto the northbound I-15 freeway has prompted a closure in Victorville.

At about 11:25 am, on April 4, 2022, the woman scaled over the freeway fencing of the Palmdale Road overpass and climbed down onto a freeway sign.

A couple of California Highway Patrol officers stopped northbound traffic and were attempting to negotiate with the woman who was sitting down with her legs dangling over the freeway.

Firefighters have deployed a couple of jump bags underneath the woman in case she jumps. A helicopter has landed at the scene and is on standby.

Traffic around the area of the incident is completely gridlocked and people traveling on the I-15 freeway should expect delays. Southbound I-15 remains open, however, traffic is backed up for miles.

Palmdale Road is currently serving as the command post for the Victorville City Fire Department as well as other agencies that are assisting.