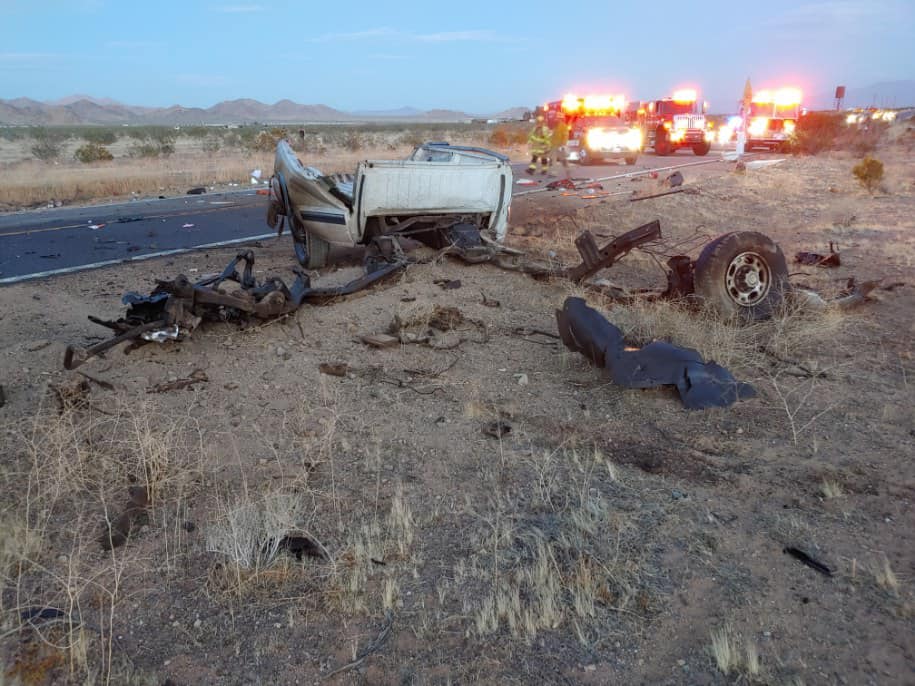 LUCERNE VALLEY, Calif. (VVNG.com) — The driver of a pickup truck was killed Wednesday night after crashing head-on with a big rig in Lucerne Valley.

On Wednesday, April 7, 2021, at 7:10 PM, officers with the California Highway Patrol responded to a traffic collision in the area of State Route 247 and Selmadolph Street in Lucerne Valley.

When they arrived, they located a double tanker 2020 Peterbilt overturned with one of the tankers torn from the main cab. Parts from the mangled and nearly unrecognizable 2002 Chevy pickup truck were scattered across the roadway of the two-lane highway.

San Bernardino County Coroner officials said the driver of the pick-up truck, a Hispanic male adult, was pronounced dead at 7:26 PM. The name of the decedent reported to be a 40-year-old from Carson, CA is being withheld pending notification of next of kin.

According to a CHP news release, the Chevy was traveling south and for reasons still under investigation, the driver of the Chevy veered into the northbound lane os SR-247, directly into the path of the Peterbilt.

The 47-year-old driver of the semi from Bakersfield, CA was transported to Arrowhead Regional Medical Center with minor injuries.

The crash is under investigation by the California Highway Patrol Victorville and anyone with information is asked to call 760-241-1186.

Related Topics:CrashFatalLucerne Valley
Up Next