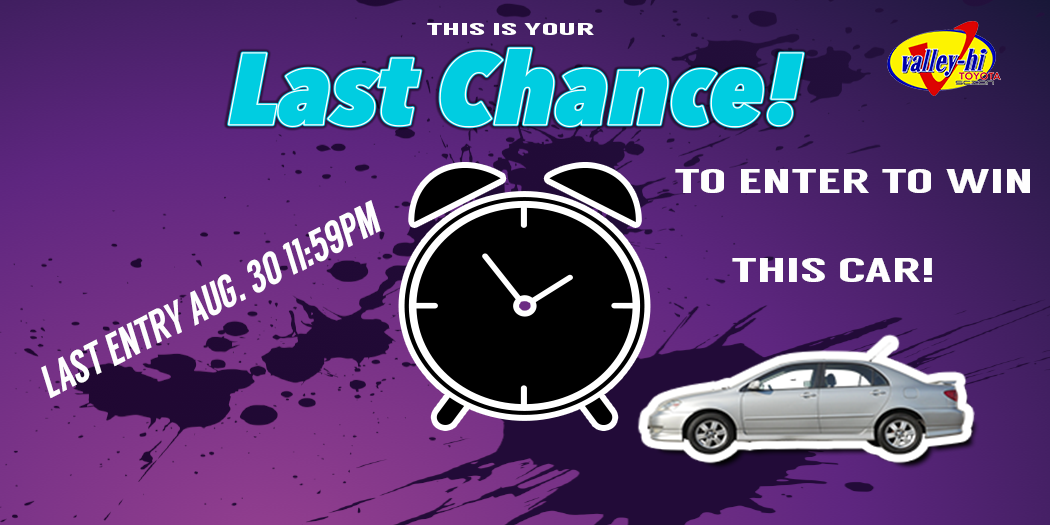 VICTORVILLE, Calif:(VVNG.com)- Potential contestants have one more chance to enter to win the Toyota Corolla S from Valley Hi Toyota.

The dealership promised via a Facebook Live broadcast that if they surpassed 12,000 Facebook likes they would increase the number of finalists from the typical 50 to 100 if reached before the end of the contest.

“We’re saddened by the departure of the High Desert Mavericks at the end of the season so we wanted to give people the chance to check out one of their final regular season games, ever!,” says Brian Ortega, Social Media Marketing Manager at Valley Hi Toyota. Victor Valley News Group held a guess-the-number contest for the tickets and the response was overwhelming.

Due to the popularity of the contest and the spike in numbers, the local dealership is giving tickets to the August 31st game against the Inland Empire 66ers.

“We were surprised by the number of contestants entering and in a matter of hours we surpassed 12,000 likes on our Facebook page. All of a sudden more people became aware that we’re giving away a car but didn’t have a chance to enter,” stated Ortega.

Victor Valley News was able to influence the Toyota dealership to hold just one more contest before the end of the month. For one day only for those who did not enter the first three contests, there will be 10 finalists from this contest. The breakdown goes like this.

Only the 100 finalists will be contacted via email, Facebook Messenger, or Instagram at 6:00 p.m. on August 31st with information regarding the next steps to take in order to win the car.

Don’t think you’ll win the car? You can win with Labor Day savings going on now! Get special event pricing before the big weekend and enjoy the holiday with family and friends. Click Here for sales on New and Pre-Owned vehicles.