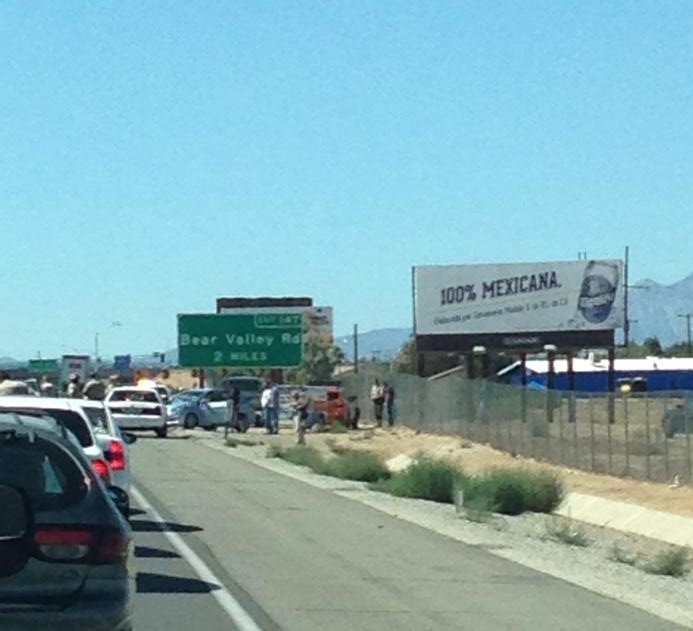 UPDATE @ 1:40 p.m.: The California Highway Patrol has confirmed the wrong way driver of the blue vehicle was an elderly woman from Victorville who entered the freeway at Nisqualli Road at approximately 10:45 a.m. According to CHP, the wrong way driver was in the #2 lane traveling northbound onto southbound traffic. The wrong way vehicle struck the right front of a tractor-trailer owned by Vons. A second vehicle that was attempting to avoid the incident was also struck. No major injuries were reported. All lanes of the freeway were re-opened just before noon.

VICTORVILLE(VVNG.com)- Several lanes of the southbound 15 freeway are currently closed following a multi vehicle traffic collision involving a tractor-trailer. The non injury traffic collision was reported at 10:45 a.m., on Tuesday between Palmdale Road and Nisqualli Road.

Victor Valley News Group member Jerry L. Withrow posted the following, “It was a wrong way driver. Blue car was going north on the southbound side. Could have been way worse.”

Commuters are reporting traffic is nearly at a complete stand still and backed up for several miles. A heavy-duty tow truck has arrived to clear the roadway. At this time its unsure how long lanes will be closed for. As an alternate route you can exit Roy Rogers Drive to Amargosa Road and get back onto the freeway at Bear Valley Road.

The exact cause of the accident is currently under investigation. More information will be updated as it becomes available.