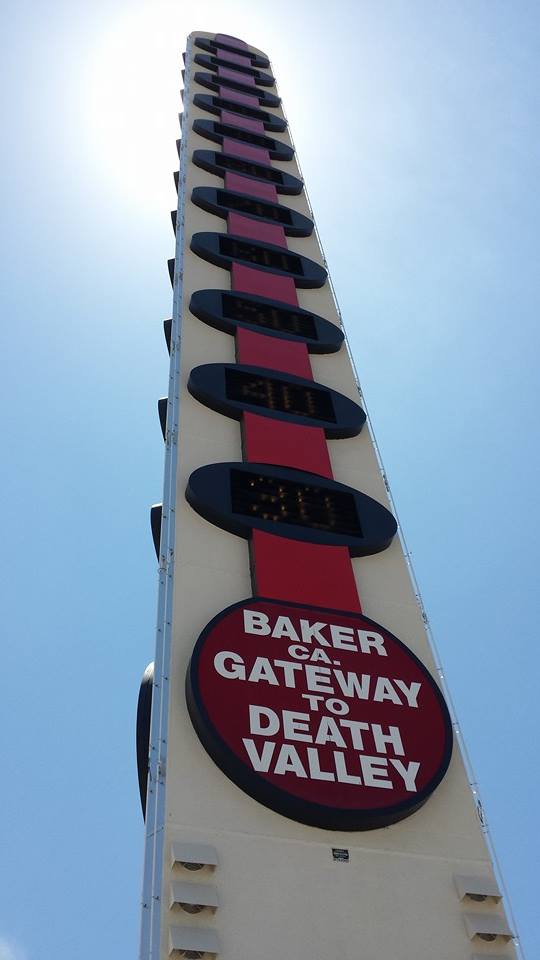 BAKER(VVNG.com)– 101 years ago today, on July 10, 1913, the highest temperature in recorded history was set in Death Valley, California. Capturing the world record with a searing 134 degrees Fahrenheit, it led to another world record being hit by also using the same number set. Standing 134 feet tall, the “World’s Tallest Thermometer” will once again show temperatures to travelers of the Mojave.

In 1991 Willis Herron spent $700,000 to have Young Electric Sign Company build him the towering landmark next to his restaurant “Bun Boy” in Baker, Calif. Built to match the record-setting temperature, the thermometer can record temperatures up to 134 F and towers above the town at 134 feet.

Strong winds knocked down the thermometer in 1991; it was rebuilt and operational by the end of 1992.

In 2003 Herron sold his restaurant along with the thermometer as his health started to decline. The thermometer was sold again in 2005, where it operated until 2012 when the owner could no longer afford to keep it running, citing monthly costs of $8,000.

In March, 2014 the Herron family bought back the facility and began preparing it for reopening. Along with a paint job and other cosmetic magic, the thermometer was outfitted with all LED, energy-efficient lighting.

Larry Fleming, 18 year Baker resident and Vice President of the Baker Chamber of Commerce, took the time to talk to Victor Valley News about the reopening of the gargantuan temperature gauge.

“It’s going to change the moral of the town” Fleming said, “It’s one of our major attractions, it’s why people stop here.”

Fleming said that multiple people complained about seeing the numbers unlit, and a Facebook page for the thermometer echoed the same results; people want it to see the temperature on this landmark!

“There were a lot of people who wanted it to be lit, that’s what makes them stop” stated Fleming, “People see it and they want to take pictures with it.”

The thermometer will operate 24 hours a day, and Fleming looks forward to the people it will bring to town. The reopening of the restaurant will also create jobs for residents in the area.

Willis Herron passed away July 11, 2007, but his legacy lives on as thousands of people pass his world record setting landmark that always ensures travels know just how hot or cold it is as they go on their way.

Today’s event was being called a “soft opening” with the grand opening and dedication scheduled for October 11, 2014.