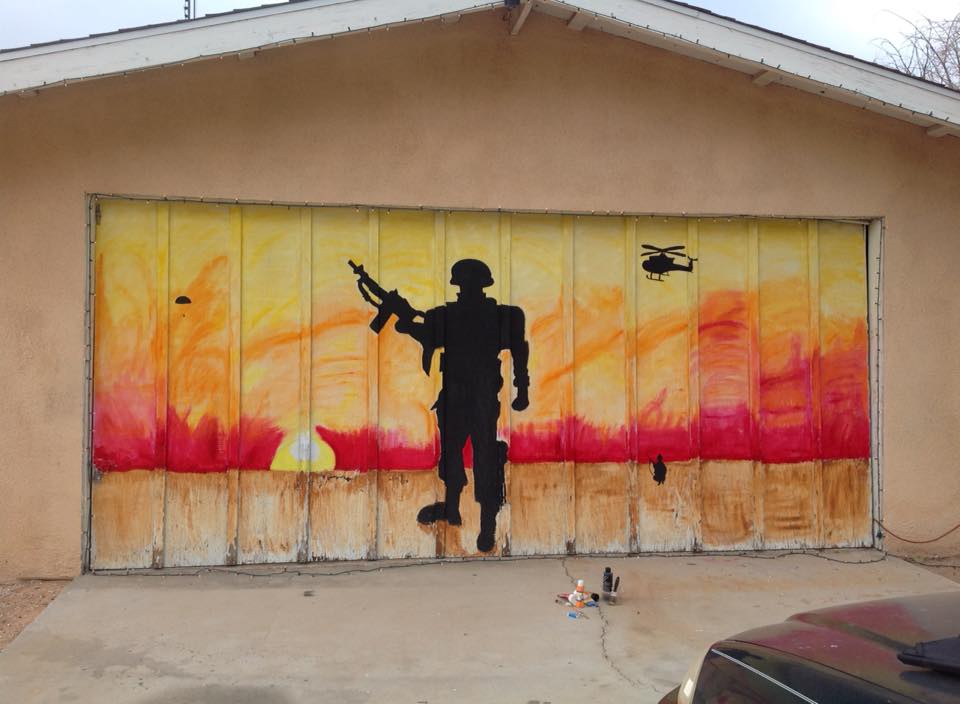 APPLE VALLEY, CALIF:(VVNG.com)- A local woman took to social media to share about a dilemma she’s currently faced with. The hand painted mural showing support for the men and women serving in the military has led to several complaints filed with the Town of Apple Valley.

On Thursday, January 7th Apple Valley Code Enforcement officer, Robert McCune stopped by the home of Denise Santiago located on the 13800 block of Kiowa Road. McCune explained he had received more than one complaint about the mural painted on her garage door. McCune told Santiago the reason for his visit was to see how to respond to the complaints.

Santiago said that the officer was very respectful and asked her what the painting on her garage meant and what it represented.

Santiago, who told Victor Valley News that she has extended family in the military and her boyfriend, Anthony Richmond also served in the army for 8 years and is a 100% disabled combat veteran.

When asked her motive and what the mural meant to Santiago said, “[I did it] Because they are the ones who keep this homeland free. They are the ones protecting our rights to even complain about this painting that I’m working on. If it weren’t for men and women who join and sacrifice all they do, even more so the ones that did the ultimate sacrifice and lost their lives for our freedoms. Who spilled blood so that you and your kids and grandkids can live a safer life on this Homefront.”

Santiago painted the mural herself and said it is a work in progress, she said her plans are to add to it to include an American Flag, a Humvee, more troops and a C130 airplane with troops jumping out and parachuting down. She said she would also like to add a fighter jet and would like to add some lettering saying, “Honor those who have served and the ones serving now.”

She said at this point she is not sure what the next steps for Code Enforcement would be, “I just hope that they don’t make me destroy this painting that I’m not only working so hard on but has such a meaningful messages to never forget our troops,” she said.