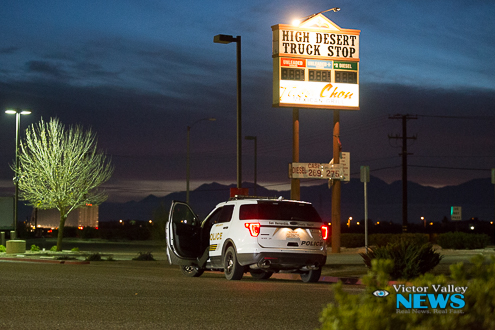 VICTORVILLE, Calif. (VVNG.com)- A 38-year-old Victorville woman was arrested after she robbed a local business and threatened the employee with a knife, authorities said.

On Wednesday, January 11, 2017, Victorville Police responded to the Hi-Desert Truck Stop on the 15600 block of US Highway 395, for a report of a woman who had just robbed a business.

The reporting party stated the suspect, Jessica Eckert, left the business after he confronted her and she threatened him with a knife, causing him to fear for his safety, stated a Sheriff’s press release.

While still on the phone with Sheriff’s Dispatch, he was able to observe the suspect as she crossed the Highway and approached a nearby liquor store. Deputies from the Victorville station and the Victor Valley station arrived at the liquor store and found the suspect standing outside.

Deputy Sarai Evans made contact with the suspect and found the stolen items and the knife still in her possession.

Jessica Eckert was arrested and booked at High Desert Detention Center for Robbery. She is scheduled to appear in Victorville Superior Court on January 13, 2017.