ADELANTO:(VVNG.com)- The San Bernardino Coroner’s Department has identified the woman killed on US Highway 395 as 68-year-old Baljit Paul, a resident of Redlands.

According to the Victor Valley Sheriff’s Department, For unknown reasons, the Camry crossed over the double yellow lines into the southbound lane of US Highway 395. The Camry collided head on into a white, 2004 freightliner semi-truck and trailer which was traveling south on US Highway 395.

The collision is under investigation by the San Bernardino County Sheriff’s Region II Major Accident Investigation Team (M.A.I.T.). Anyone with information regarding this collision is asked to call Deputy Sahagun in the Victor Valley Station at (760)552-6800. 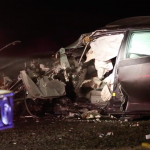 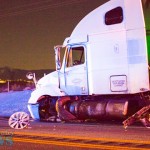 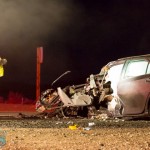 Highway 395 was shut down following a traffic collision between a tractor-trailer and a Toyota Camry. (photo by Gabriel D. Espinoza, Victor Valley News)