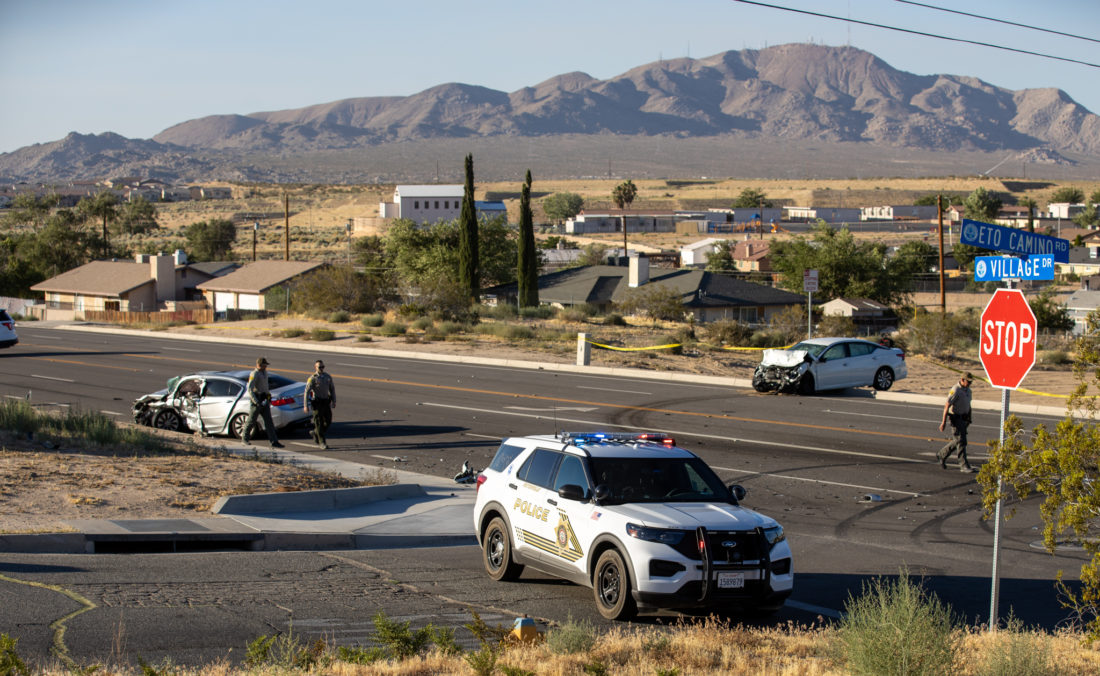 The fatal crash prompted the roadway to be closed for several hours. (Hugo C. Valdez, VVNG.com)

VICTORVILLE, Calif. (VVNG.com) — A woman was killed in a crash at the intersection of Village Drive and Eto Camino Road Friday afternoon in Victorville.

According to a sheriff’s news release, the Honda, occupied by a driver and two children, was traveling west on Eto Camino Road and a white Nissan Altima was traveling north on Village Drive.

“The driver of the Honda attempted to make a left turn onto southbound Village Drive in the path of the oncoming Nissan. The Nissan collided with the front driver side door of the Honda,” stated the release.

Victorville City Fire pronounced the driver of the Honda deceased at the scene, and the two children in the Honda were transported to a trauma center for treatment.

A family member reached out to VVNG and said the children are 9-year-old twin girls and were removed from the vehicle by some Good Samaritans and driven to a relative’s home who lives nearby. As of Saturday morning, both girls remained hospitalized and are expected to make a full recovery.

A woman at the scene spoke to a VVNG photographer and said the white Nissan involved in the crash is a rental car rented by her daughter. The woman said her daughter’s boyfriend stole the white Nissan several days ago and refused to give it back. “He’s been sending her videos of him driving the car and telling her she wasn’t going to get it back.”

According to the woman, since the vehicle wasn’t registered to either of them, police wouldn’t take a stolen vehicle report. She also said the rental company was billing her daughter almost $200 a day due to the car not being returned on time.

The male driver of the Nissan was transported to a local hospital with unknown injuries.

Anyone with information or anyone who may have witnessed the collision is asked to contact Deputy M. Lee or Deputy A. Hylin at the Victorville Police Station at 760-241-2911 reference case # 172006362.