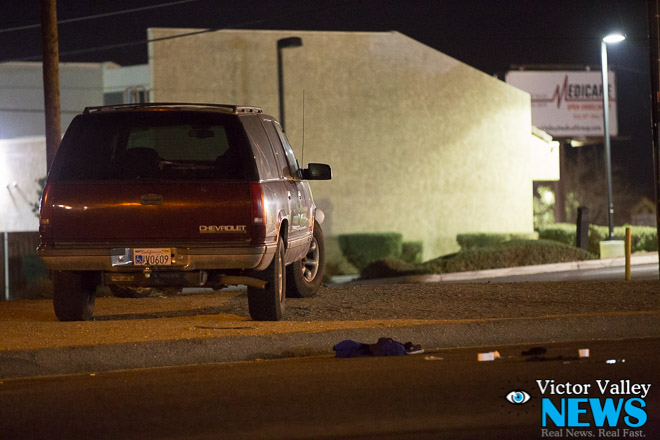 HESPERIA-(VVNG.com): A female pedestrian suffered major injuries after being hit by a vehicle near the intersection of Third Avenue and Yucca Street on Sunday evening. At about 7:10 p.m., the woman, identified as Kimberly Ann Robart was crossing the street when the Maroon Chevy Suburban, driven by Paul William Thomas, was driving north on Third Avenue, south of the intersection of Yucca Street, when the front of the vehicle struck her in the #2 northbound lane.

When deputies arrived on scene the woman was lying on the ground on the east side of Third Avenue. According to scanner traffic the female was not moving, but was breathing. Medical aid was rendered at the scene and the woman was taken to Desert Valley Hospital to be airlifted to Arrowhead Regional Medical Center, where she is being treated for major injuries.

Deputies called for the Major Accident Investigation Team (M.A.I.T), who responded to conduct the investigation. San Bernardino County Sheriff’s officials said that they MAIT investigators determined that speed and alcohol do not appear to be a factor in this collision.

Third Avenue was closed in both directions between Main Street and Yucca Street until about 8:02 p.m. while MAIT investigators processed the scene for evidence and interviewed witnesses.

Anyone with information about the collision can contact Deputies Michael Corral or Kevin McCurdy from the Hesperia Sheriff’s Station or the San Bernardino County Coroner’s Office.