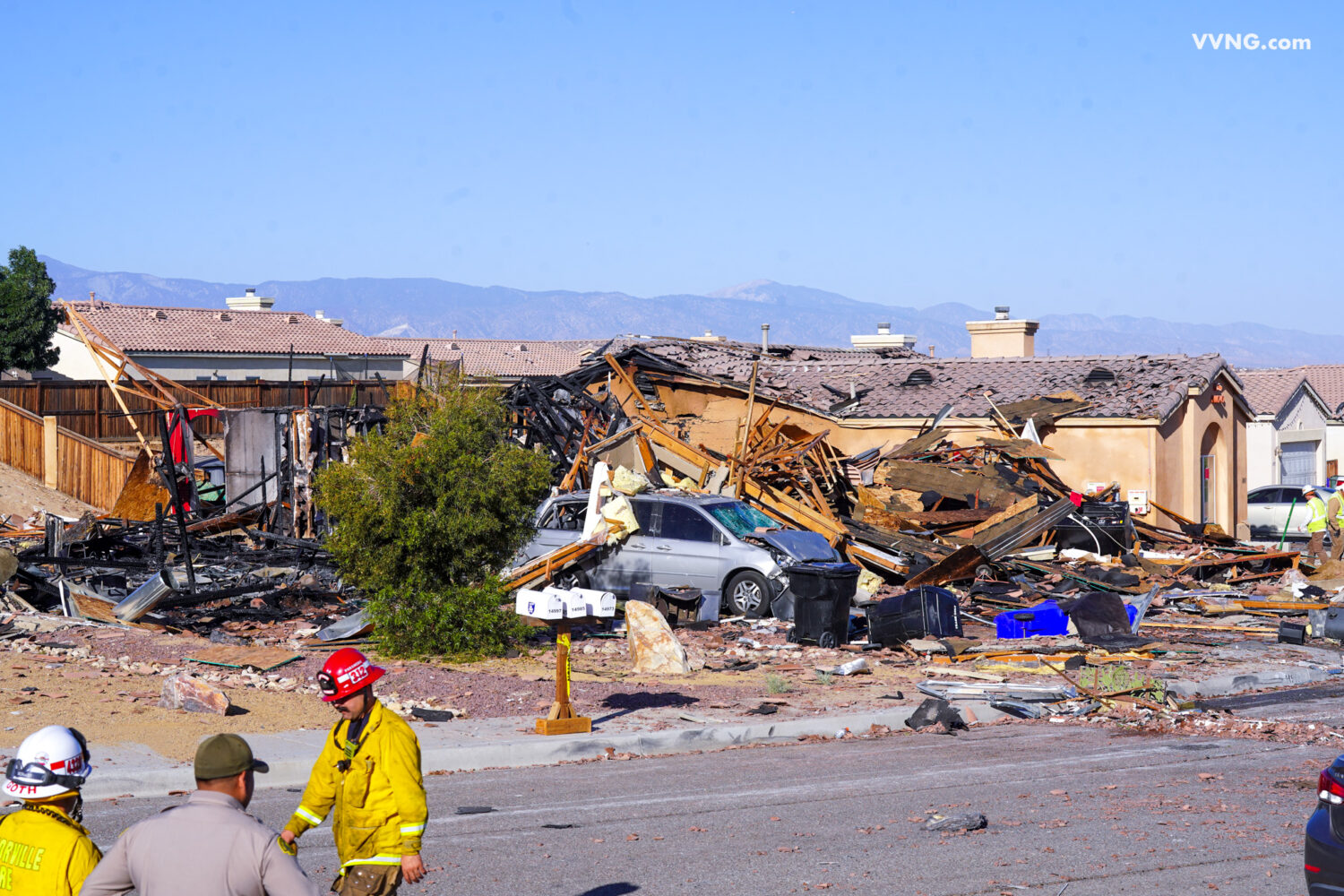 VICTORVILLE, Calif. (VVNG.com) — A woman was airlifted to a burn center after an overnight explosion at a home in Victorville.

Brenda Ogaz lives across the street and was awake when she heard a smaller explosion followed by a second one. “I looked out my window and the whole house was engulfed and there were what looked like fireworks coming out. We all rushed out to try and help but there was nothing we could do,” she said.

A woman with burns was rescued from the home and airlifted to a trauma center. An update on her condition was not available. A small dog also injured in the fire was picked up by an Animal Control Officer (ACO) around 7:00 am. The ACO also removed a deceased cat from a pile of debris.

The force of the blast caused extensive damage to both neighboring homes as well as several others in the culdesac. A home across the street had the wooden front door blown off and another resident said he was pushed out of bed.

The explosion caused a shockwave that was felt as far away as Yucca Loma Road in the Town of Apple Valley. Residents said that windows rattled and that it felt like an earthquake.

Firefighters at the scene confirmed that at least two homes would be red tagged and considered inhabitable due to the damages.

The cause of the fire is still under investigation. This is a developing story and additional information will be updated as it becomes available.

UPDATE @ 1:15 pm — Southwest Gas released the following statement regarding the incident on Adalane Ct. in Victorville.

Southwest Gas responded to an incident near Adalane Court and Llanada Avenue in Victorville this morning. Our hearts are with the person injured in this incident and we thank first responders for their quick response. Safety is our top priority and our crews have turned gas off to the impacted residences and worked with first responders to ensure the area is safe and secure. While the cause of this incident remains under investigation, Southwest Gas has thoroughly inspected the incident site and surrounding area for gas leaks. No leaks were found.  All Southwest Gas infrastructure serving the community is operating without issue. As part of Southwest Gas’ rigorous safety practices, a Southwest Gas contractor conducted periodic routine leak inspection work in the area last month. No leaks were found at that time either. Southwest Gas will continue to work closely with officials at the scene to provide any necessary assistance.

UPDATE @ 3:30 pm — The City of Victorville released the following statement regarding the house explosion:

Early this morning, around 3 a.m. , our Victorville Fire Department was dispatched to a reported fire and explosion at a home in the 14000 block of Adalane Court in the City of Victorville.

Tragically, the occupant of the home, a 40-year old woman was injured. She was airlifted to a trauma center down the hill.

Two adjacent homes were damaged in the blast and have been red tagged, meaning they are uninhabitable at this time. The American Red Cross was on scene to offer assistance to the four individuals who have been displaced from these neighboring homes.

We have reports of debris from the affected home being found up to a half a block away.

Our Victorville Fire Department arson investigator has been on the scene. The cause of the explosion is under investigation.

Just like so many in our community, we are filled with shock by this tragic incident and we extend our thoughts and prayers to our resident who was seriously injured and her loved ones as well as the neighbors who have been negatively impacted.

City staff have made contact with the residents in this neighborhood to check their status and to ensure they are aware of support services available to them. The City will assist affected residents by cleaning up debris and will provide structural inspections of homes. Neighbors who are in need of assistance are welcome to contact the City at (760) 955-5104.

On Wednesday, June 29, 2022, at approximately 2:52 a.m., Corporal D. Maddox, from the Victorville Police Department, heard a loud explosion near Ventura Lane and Oceanside Drive, while on patrol in Victorville. Maddox quickly responded and arrived within one minute. Maddox discovered a house in the 14000 block of Adalane Court had exploded.

Upon arrival, deputies saw debris in the neighborhood and found the residence fully engulfed in flames. With the cause of the explosion unknown, Maddox evacuated residents in the area.

A female, home alone when her house exploded, was able to pull herself outside. Maddox located the female burn victim and coordinated for emergency medical response. The victim was transported to a local hospital, and later flown to a trauma center. The victim was in critical but stable condition.

Stabbing investigation underway at the Riverton Apartments in Victorville