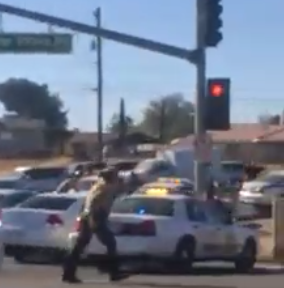 Deputies, while in route to the robbery location were looking for anyone matching the description of the two suspects. The vehicle was spotted in the area of Rio Vista Elementary School and for precautionary measures the school was immediately placed on lockdown until it could be determined that there was no immediate threat.

After further investigation deputies were able to locate the suspects vehicle on Bear Valley Road. The suspects continued to drive into Hesperia and Apple Valley deputies conducted a felony car stop on I Avenue in the City of Hesperia.

The three suspects, Allen Robinson, age 27 of Victorville, Aubrey Coleman, age 20 of Victorville and Stacy Stallworth, age 18 of Victorville were taken into custody at gunpoint without further incident at 10:12 a.m. The suspects were booked into High Desert Detention Center for PC211 (Robbery).