VICTOR VALLEY-(VVNG.com): If you are a commuter you are likely already aware of the increased accidents that come with humidity on the freeways, the I-15 being no exception. Holiday’s also bring on an abundance of accidents, many of those unfortunately fatal. This New Years eve and New Years day travels, due to weather conditions in conjunction with impatient and/or intoxicated drivers may be hampered by closed roads due to harsh weather conditions.

Snow is expected at low elevations from Tuesday night through Wednesday. Winter storm “Frona” is a Pacific Northwest originating storm that will plow through the Southwest and give us some much-needed precipitation and likely some much desired snow. Winter storm “Frona” is expected to bring in the new year with snow for the San Bernardino and San Gabriel mountains as well as to elevations as low as 2,000 on Tuesday and Wednesday.

As early as 9:00 PM on Tuesday night temperatures are expected to drop to the mid-30’s causing high desert cities to get some rain mixed with snow. Victor Valley residents will likely wake up to snow that is expected to fall from about 4 a.m. likely until about 10 a.m. in some areas on Wednesday morning with some light snow mid-day for most Victor Valley cities.

For holiday travelers, plan your trip wisely, leave early and avoid driving the Tuesday night or Wednesday late afternoon if at all possible. Plan for accidents, road closures and/or traffic mapping out alternate routes and bringing items that will help those occupying your vehicle through possibly extended travel times. Make sure to plan for your trip by checking tires, brakes, windshield wipers and extra fuel. Also have an emergency travel kit with flashlights, cell phone chargers, food, extra clothing, jackets, blankets, water,and medications. Don’t forget to bring plenty of books, coloring books and travel games for your young passengers. 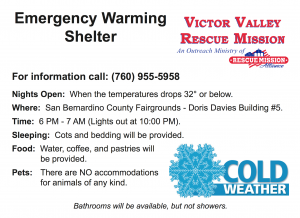 Snow is expected in areas in lower elevated areas such as Redlands, Yucaipa, and Beaumont, some snow falling for short periods in areas as low as 1,000 feet elevation. Expect snow, ice and possible low visibility on most of the roadways including most of the 15 freeway to the Las Vegas Nevada area, through much of Highway 395 as well as Interstate 40 into the Arizona area. Those with high-profile vehicles should drive with additional caution due to high winds expected.

Winter storm 214/2015 “Frona” can bring New Year joy and beauty of snow to those longing for it and can also bring disaster for those on the road.