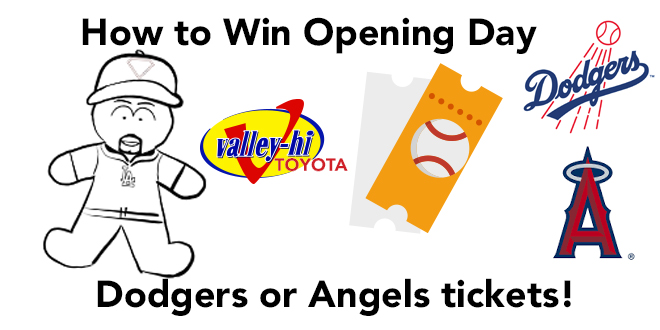 “There’s nothing like attending the first game of the season. The hot dogs are delicious, the crowd is ready for a new year, and everyone is in first place,” says Todd Stokes, General Manager of Valley Hi Toyota.

A few months remain before the opening day of their new dealership. “It’s really taking shape and the community is anticipating our new home,” continues Stokes. It’s a perfect time to welcome their new social media followers to more fun online. Last month, the Victorville Toyota dealership gained 2,000 Facebook likes in less than one month after announcing Used Car Giveaway 14 on a Facebook Live post.

“Contestants had it easy. All they had to do was like the page, like the post, and comment. After a record 31,000 comments and 3,000 shares, Francisco Corrales Gomez of Apple Valley was randomly selected as the winner of a 2001 Toyota Avalon XL. Included in the contest was a free stereo system by Audiotisics in Victorville, as well as free tint provided by VIP Tint & Audio in Victorville. Watch his family pick up the car here.

“I can’t believe I won a car. I’m in total shock. It’s really going to help my family out,” explains Gomez. “I can’t thank Valley Hi Toyota enough for this amazing opportunity.”

This is the third year in a row where Valley Hi Toyota is giving away Opening Day tickets to the Dodgers and Angels game. This time around, the dealership is aiming for more family participation by announcing a social media photo contest in the same light of Flat Stanley, the cut out figurine who travels all over the world and teaches children about geography.

“Our last car giveaway was a major success,” says Brian Ortega, Social Media Marketing Manager at Valley Hi Toyota, “However, this time we wanted those who are major fans and followers a greater chance to win these Opening Day tickets.”

Contestants will qualify to win by downloading their Toyota Todd character here (instructions included)  or here (photo only.)  Or go to valleyhitoyota.com/community. All one has to do is color Todd creatively in either a Dodgers or Angels uniform. Next cut him out, then take a photo of him anywhere. Take a photo of Toyota Todd at home, at school, at dinner, on vacation, at the grocery store, the more creative, the likelihood your chances will increase to become a finalist. First LIKE and FOLLOW Valley Hi Toyota. Post on this post on Facebook, Instagram, Twitter, and Snapchat. That’s 4 opportunities per day until the last entry if one chooses to use all forms.

“The people who really want to go will become the most creative and consistent. If they just have Facebook, they can post once daily. Or if they use all four social media platforms, that’s four photos daily! We’re really encouraging families to participate. When I took my son to Opening Day they look in his eyes was priceless!,” continues Ortega. Go to valleyhitoyta.com/community.htm for more details and to download Toyota Todd.