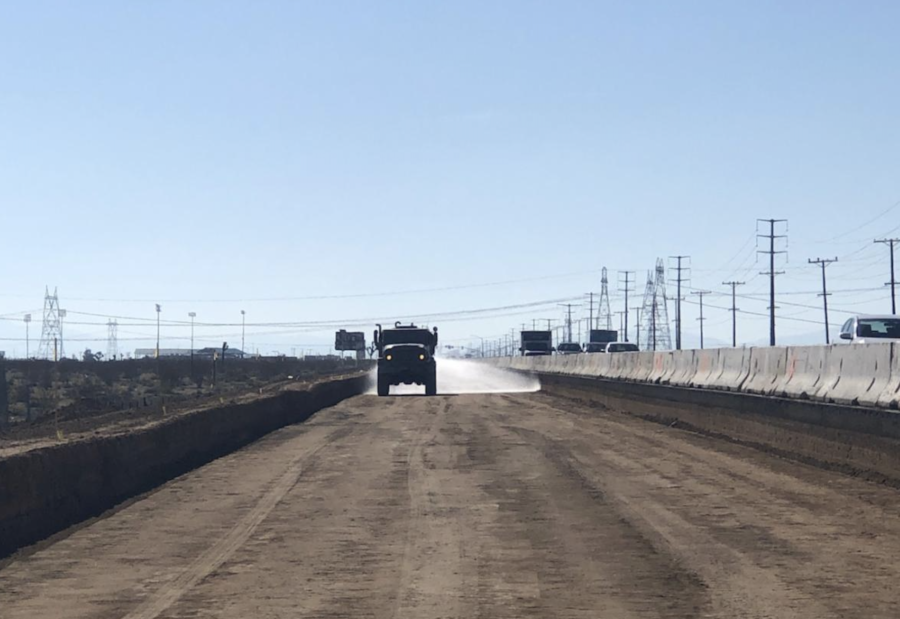 ADELANTO – VICTORVILLE, Calif. (VVNG.com) — Work on the US 395 Widening Project located between SR-18 (Palmdale Road) and Chamberlaine Way 395 is expected to continue this week.

This is the first of three planned phases for 17 miles of Highway 395 from I-15 to Desert Flower Road in order to enhance safety, to improve travel time, and to relieve congestion along the corridor.

“US Route 395 is one of the main north/south highways in southern
California providing access to and linking economic centers, recreational
areas, and urban and rural regions,” according to the SBCTA.

The first phase represents an investment of nearly $60 million in transportation funds, including approximately $18 million in Measure I funds.

In addition to the lane expansion, other improvements include turn lanes and signals at various intersections within the project limits including:

• A new signal at Seneca Road, leaving a dedicated turning lane for
northbound traffic to turn left.
• Northbound motorists will no longer be permitted to continue north on
to Adelanto Road at US 395 and will have to use another access point.
• Holly Road will be reconfigured to only allow motorists to turn right
from Holly Road on to US 395.
• Added traffic signals at Mojave Drive to allow for two through lanes in
each direction.
• Ranch Road will be modified to include ADA requirements, along with
adding pedestrian signals.
• Air Base Road will be widened to two lanes in each direction. ADA
improvements and new signal polls will match the new configuration.
• Video detection systems will be added to Chamberlaine Way to help
signals operate efficiently

Construction Alert for week of March 2, 2020

All work will be conducted behind k-rail during the day on US 395 between SR-18/Palmdale Road and Chamberlaine Way and includes:

Please be alert and proceed with caution as you travel through the corridor.

NOTE: VVTA Routes 31, 33, and 54 are on long-term detour in Adelanto and Victorville. Please click here for more information.

More about the project

The other two phases, one spanning I-15 North to Palmdale Road, and a second from Chamberlaine Way to Desert Flower Road, are contingent upon securing state and federal funding.

SBCTA administers Measure I revenue and determines which projects receive Measure I funding.

The project was first approved in 2009 and work began in Spring of 2019. The anticipated end of construction is Spring 2021.

Break-down of funding for this project