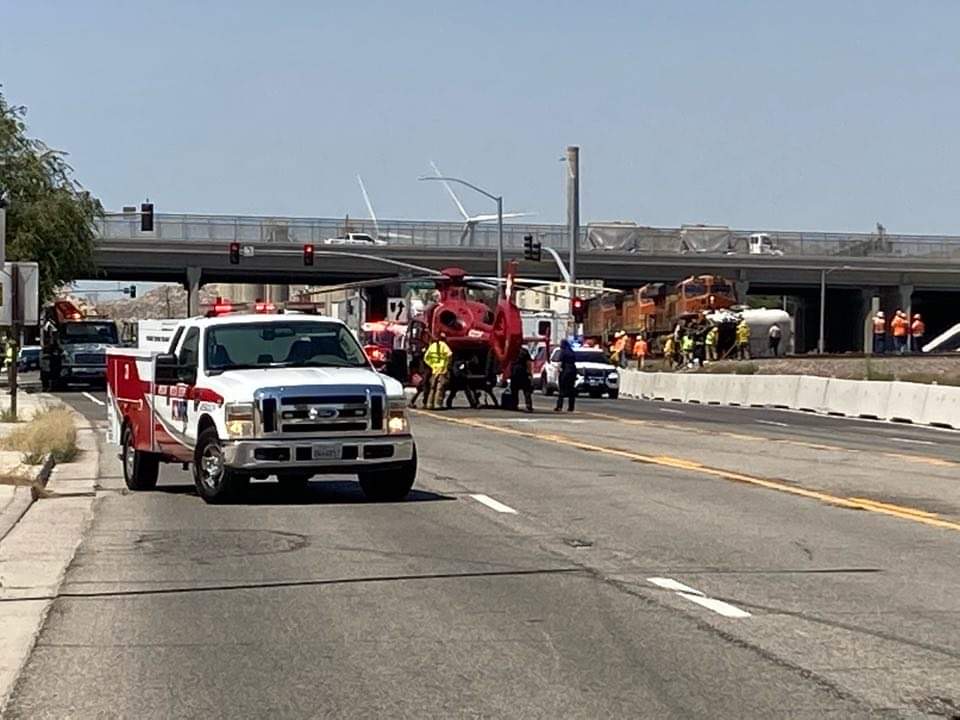 (Photo by Mike Molly, for VVNG.com)

VICTORVILLE, Calif. (VVNG.com) — A water truck exiting from the northbound I-15 freeway in Victorville overturned and landed on the train tracks.

For reasons still under investigation, the water truck was unable to stop as it exited the off-ramp and slammed into at least one other vehicle before crashing over a concrete barricade and landing on the train tracks as a train was approaching.

The conductor of the BNSF train was able to stop just in time and avoided crashing into the overturned truck with the driver still trapped inside.

VVNG members Leyla Cruz said her boyfriend witnessed the crash and heard the driver of the truck shouting “my brakes, my brakes” and was honking the horn to warn others. “He was the first one on the scene and tried to help the guy out but his leg is stuck under the semi,” stated Cruz. According to Cruz two young adults inside the sedan were badly injured.

Firefighters from Victorville City Fire and Apple Valley Fire responded to the scene and assisted with extricating the driver of the water truck. Firefighters requested two helicopters to land at the scene and airlift the injured to out of area trauma centers.

At approximately 2:00 PM the second helicopter, Reach 13, landed at the scene and airlifted the driver of the truck.

D Street is currently closed between 2nd Street and the I-15 as officials work to investigate and clear the accident. Additional information will be updated.