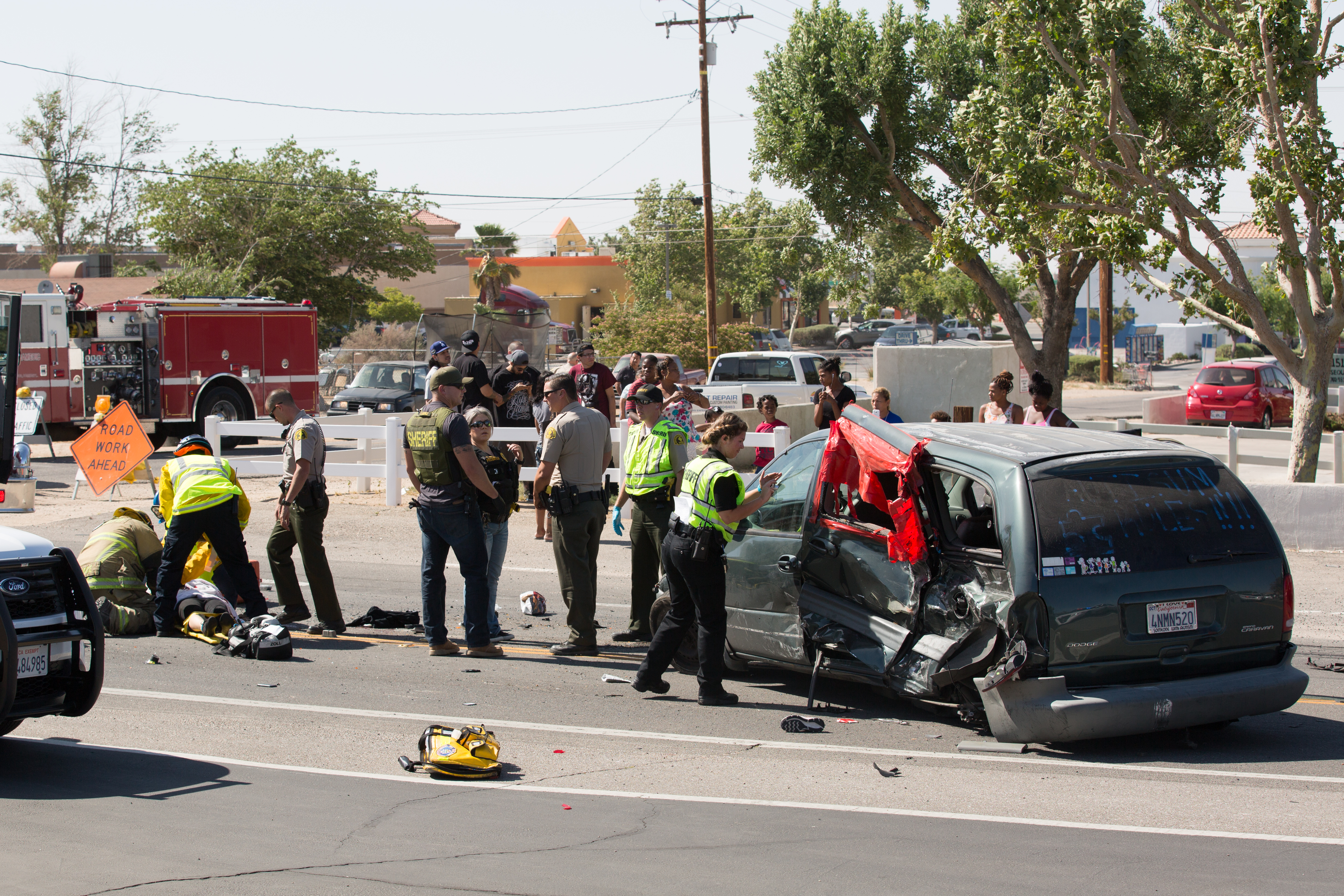 At about 3:46 PM, deputies responded to the intersection of Locust Avenue and Sequoia for a multi-vehicle traffic collision. Involved in the collision were a Dodge ram Truck, Dodge Caravan, and a Dodge Challenger.

According to Hesperia Sheriff’s station spokeswoman Karen Hunt, a teenage girl was ejected and another young child suffered severe injuries.

“A Dodge Ram truck that was headed northbound on Locust and failed to yield for oncoming traffic,” said Hunt, “It collided with the Dodge Caravan traveling eastbound on Sequoia, that caused the Caravan to collide into a vehicle that was headed westbound, a Dodge Challenger.”

Hesperia resident Belita Blye witnessed the accident and quickly maneuvered out-of-the-way to avoid the impact. Blye told Victor Valley News that she saw someone fly out the window of the van that was flipping:

The young girl that I approached, her head was bleeding really bad and I proceeded to run to my truck and get my son’s shirt and daughter’s jacket and wrapped her head up because she was laying on the hot pavement.

Six occupants inside the Dodge Caravan were taken to Loma Linda University Medical Center. Three went by air and three by ground with moderate to major injuries, said Hunt.

Three other occupants, with minor injuries from the Challenger, were transported by ground to Desert Valley Medical Center.

Local resident Lenna Vaughn said she has witnessed several accidents that occurred at the same intersection. She states the City changed the direction of the stop signs, shifting who has the right of way. Vaughn states that even with the change it has not helped reduce the amount of traffic accidents.

The roadway was closed for several hours while authorities conducted the investigation.

A child is being carried away by firefighters after suffering major injuries as a result of a three-vehicle traffic collision. (Gabriel Danny Espinoza, Victor Valley News)

One person was ejected from the green Dodge Caravan and 5 other occupants inside the van were injured. (Gabriel Danny Espinoza, Victor Valley News)