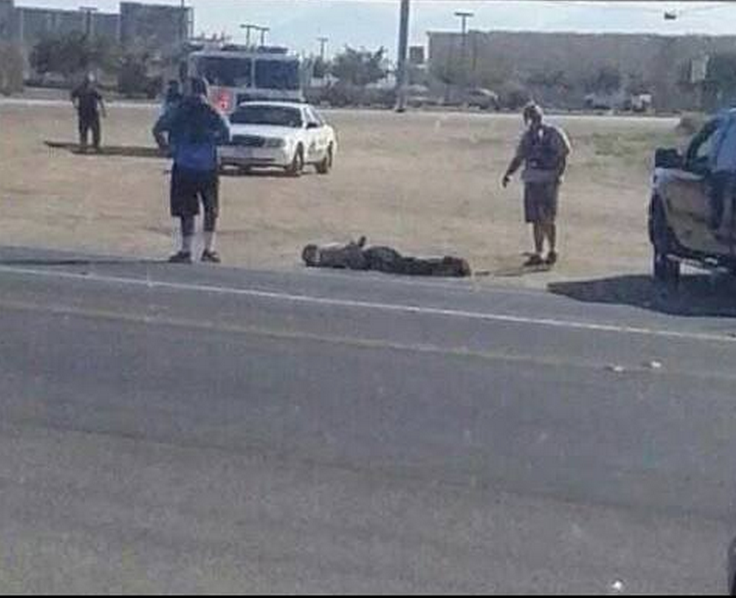 APPLE VALLEY: (VVNG.com)- An afternoon shootout on Wednesday, June 25th involving undercover Los Angeles County Sheriff’s officers ended in a gun battle as they attempted to stop a Black Nissan Titan believed to be driven by a murder suspect.

The suspect was heading south on Central Avenue in the city of Apple Valley that’s when officers attempted to stop the 187 suspect vehicle.

Moments later a gunfight ensued between the officers and the suspect. An eye-witness Chris Miller, and his daughter who were approaching the intersection caught the entire moment on video. Glass shattered on to the back of an officer’s head and neck during this exchange of gunfire. The officer was said to have been airlifted for treatment of his non-life threatening injuries. The scanner report was initially a report of an officer down but later changed to an officer being injured due to shattered glass.

The on-scene officers eventually gained control of the situation by fatally shooting the murder suspect, who was in the field on the east side of Bear Valley Road and Central Avenue. The suspect died at the scene. His name has not been released.

Units shut down the intersection of Bear Valley Road, east of Central to conduct their investigation and continued to remain closed as of 9am on Thursday.

Several residents living in nearby homes thought they were hearing the sounds of multiple fireworks, some claiming to have heard up to 60 shots fired. Scanner reports stated that there bullet casings found scattered all over the area.

Many witnesses were the scene and witnessed this exchange in gunfire. There was no time for authorities to take proper precautions to insure the safety of the public, fortunately no innocent bystanders were injured. “Too may shots (were) fired, sounds like everybody emptied their clips and didn’t pay attention to the innocent in the immediate area” commented Victor Valley News member, James Checo.

Witnesses, who were all quite shocked and shaken by what they had just witnessed, were questioned as part of the investigation then we’re able to leave.

The investigation will ultimately be reviewed by the Chief of Police, Office of the Inspector General and the Board of Police Commissioners for compliance with the Department’s Use-Of-Force policy which states that an officer’s use-of-force actions must be objectively reasonable. Additionally, the Los Angeles County District Attorney’s Justice System Integrity Division will conduct a comprehensive review of the facts of the officer-involved shooting.