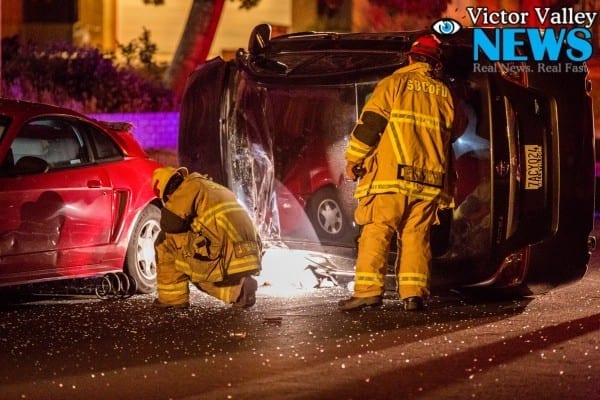 VICTORVILLE:(VVNG.com)- A man was transported to a local hospital after his vehicle rolled over on the 12700 block of Jade Road in Victorville. Dispatch received the report at approximately 9:15 P.M., on Tuesday, June 16, 2015.

According to a witness, the male driver of a Nissan Altima struck a utility pole with the right front-side of the vehicle at the corner of Jade Road and Buggy Whip Court.

The impact of the collision knocked over the utility pole causing the vehicle to spin around and roll over before eventually coming to rest on a Ford Mustang parked on the south side of Jade Street.

A neighbor named Rick told a Victor Valley News reporter, his brother immediately ran over to the accident scene.

“My brother pulled the man out from the vehicle. You could smell the alcohol”, he stated

The driver was taken by ground ambulance to a local hospital with unknown injuries.