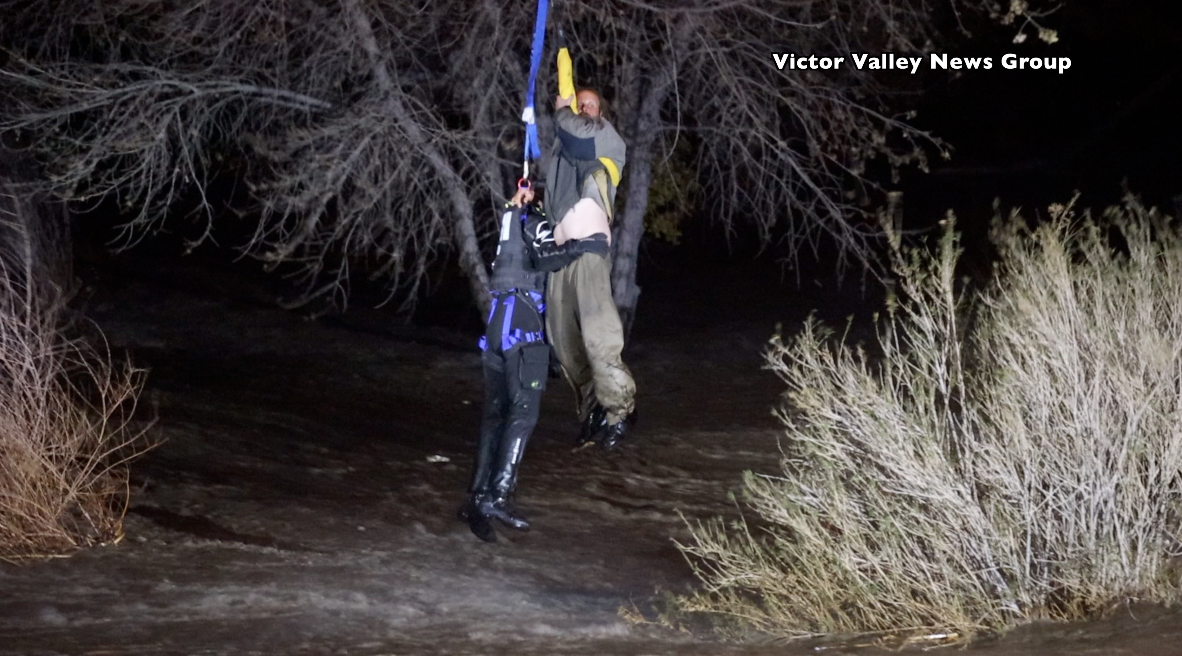 VICTORVILLE, Calif. (VVNG.com) — A homeless man was plucked from the Mojave River during a swift water rescue behind Eva Del Park in Old Town Victorville on Valentines Day.

The rescue was initiated just after 5:30 pm when heavy rains throughout the Victor Valley caused the river bottom to become engorged with fast flowing water.

A male victim who is believed to have been living in a homeless encampment along the typically dry river’s edge became trapped on a small piece of dry land across from the levee road.

“For those familiar, the levee road is always dry – its [now] flowing bank to bank. Some of the main concerns we had was trying to figure out a way to make access to the victims. Typically we’re able to send crews across a water level that’s not too high,” stated Joshua Sprague, Battalion Chief for San Bernardino County Fire “But that wasn’t the case tonight.”

Chief Sprague said the Sheriff’s helicopter is currently staffed with a rescue diver because of the weather conditions the desert has been experiencing.

“We worked with the San Bernardino County Sheriff’s, they were able to bring in one of their patrol helicopters,” stated Sprague.

The Fire Department and Sheriff’s Department came to a mutual agreement to utilize a process called a “long line operation,” where the rescue diver would dangle 30-50 feet below the helicopter and would then drop next to the victim with a harness.

The helicopter was able to tactically position the diver onto the small island where was, then hoisted him to safety.

The man was transported by ground ambulance to a local hospital for treatment of minor injuries.

In the 8 o’clock hour Thursday evening, rescue personnel responded to the same area where they located and rescued two additional victims trapped in the river bottom.

“There’s a large number of homeless that live in the river bottom, so we’re still concerned about additional [victims],” stated Chief Sprague.

The Fire Department requested the assistance of the Red Cross to help with 10 adults who were displaced from the river bottom Thursday night.