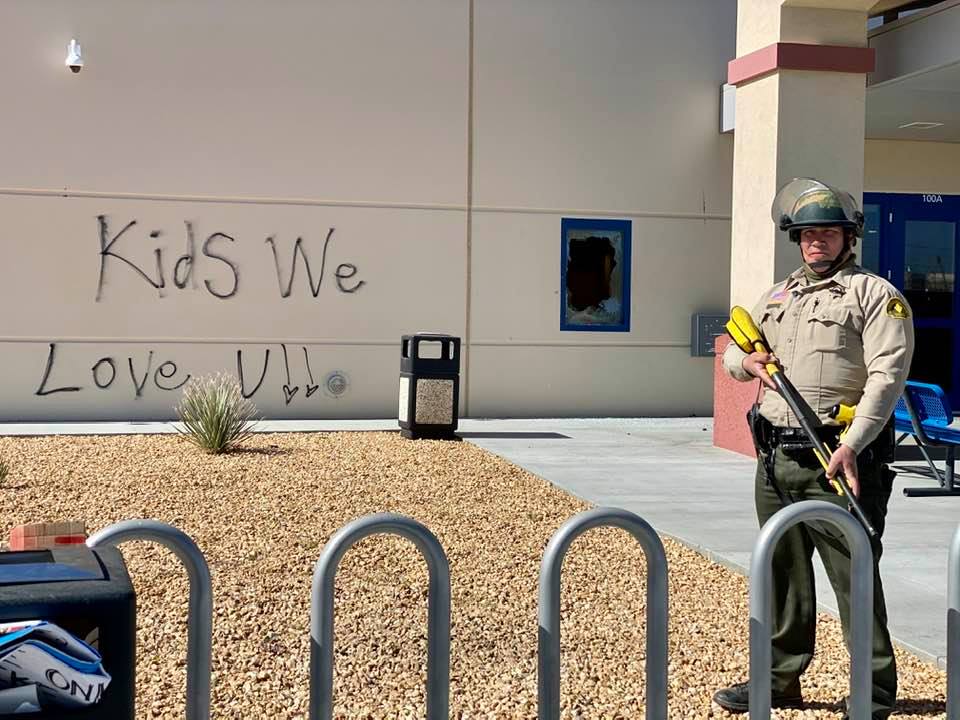 At about 2:00 PM approximately 300 people rallied together to protest what the group says are harsh living conditions at ICE facilities, to demand the release of children allegedly being housed in cages, to stop the use of harmful disinfectant sprays used for COVID-19, and to abolish ICE.

Sheriff’s officials said the march began at the corner of Highway 395 and Rancho Road started as a ‘peaceful protest’ however, things drastically changed when it ended outside of the facility in the 10400 block of Rancho Road.

At about 3:45 pm deputies received information that a large number of the protestors had become violent and were throwing rocks at the building and spraying graffiti on the walls.

Videos shared on social media showed protestors shouting as they pounded on the glass windows and doors of the immigration facility. Things escalated and the vandals smashed windows and graffitied the walls with messages that read “kids we love you” and “F**ck Ice”. Other videos posted on social media showed a woman jumping on a vehicle parked in the parking lot and kicking in the front windshield. The GEO flag was brought down and destroyed.

“Further reports stated that windows were being broken, and demonstrators were attempting to breach the building,” stated sheriff’s officials in a news release about the incident.

A videographer documenting the scene said many of the peaceful protestors got in their vehicles and left after they witnessed the mayhem unfolding.

Officials said responding deputies were met with bottles and rocks that were being thrown at them and their marked vehicles. In an attempt to secure the building, deputies formed a line of protection to get protestors away from the facility and into the parking lot.

According to the news release, “a protestor was seen with a rag that he had partially crammed into the gas tank of a vehicle and was attempting to start the cloth on fire to ignite the car.  Deputies deployed less than lethal munitions to try to stop the suspect and control the crowd.  The suspect was struck and immediately ran into a group of protestors to hide from deputies.”

During the incident, Sheriff’s Aviation personnel made dozens of announcements on the public address system requesting the protestors disperse from the area.

Officials said after nearly 2 hours of destruction and unlawful behavior, deputies were able to disperse the crowd from the area.

A 31-year-old woman from Anaheim identified as Leticia Hernandez was the only person arrested for vandalism, officials said.

The Sheriff’s Employees Benefit Association (SEBA) commented on the incident and said the following:

Meanwhile… our members show incredible restraint protecting the First Amendment rights of those protesting at the Adelanto ICE Processing Center. Protestors relentlessly hurl insults at our deputies despite the fact that our members have nothing to do with the immigration operations of this private, federal facility.

Deputies are present simply because the Geo Group facility is in their patrol jurisdiction. They are, once again, heeding the call to ensure a safe space for voices to be heard.

Anyone with information is asked to contact the Victor Valley Sheriff’s Station (760) 552-6800. Callers can remain anonymous and contact the WeTip Hotline at 800-78CRIME or www.wetip.com.