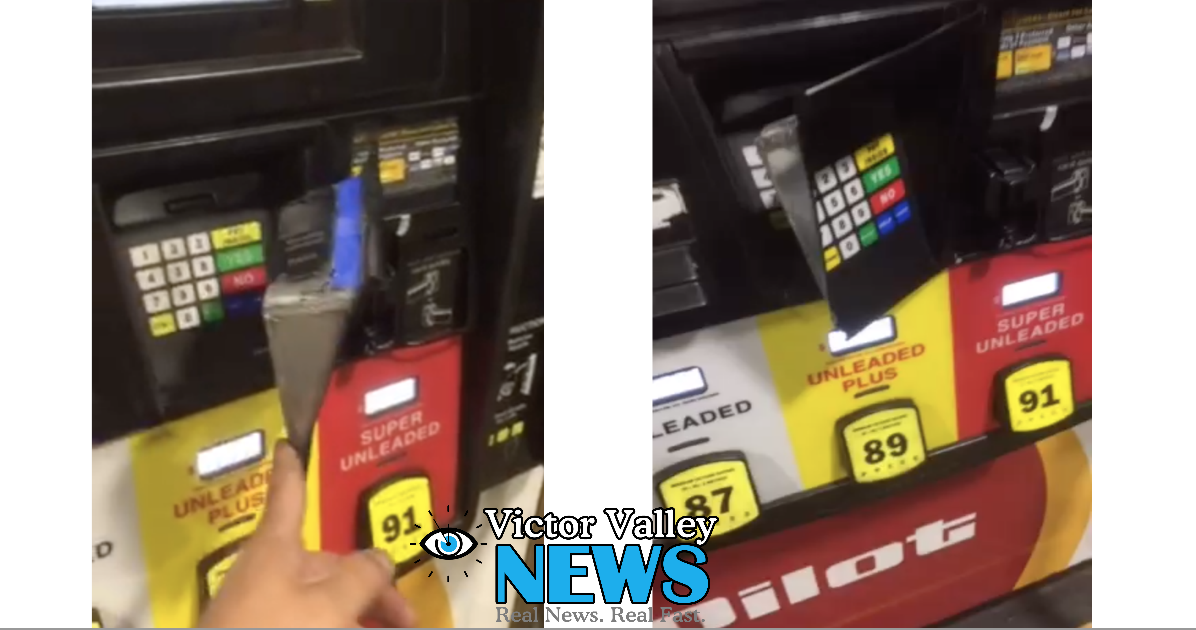 Hesperia, Calif (VVNG) A skimmer used to steal credit card information was discovered by a local man when he attempted to pump gas at a nearby gas station.

John Castro, 34 of Victorville, posted a video in the Victor Valley News group, which gas over 83,000 members, to show the card skimmer he found attached to the pump he was using on December 9th, 2016.

“It is 1:34 in the morning, I’m trying to pump gas, it’s not letting me pump gas, and this machine grabbed all my information from my credit card,” Castro said in the 26-second video that he posted in the group.

Castro stated the credit card skimming device was found attached to the original pin pad on gas pump #8 located at the Pilot Travel Center on 8701 US Highway 395, in Hesperia.

“The night of the incident I walked into the station and asked to speak with the manager on duty. I then asked her to walk out to the pump with me, and she did,” Castro said, “I showed her what I found, and she told me it was part of the pump.”

What shocked Castro was when the clerk notified her manager and that manager began accusing Castro of breaking the pump.  “The male employee then approached me accusing me of breaking the pump and proceeded to ask for my name, address, and plate information,” Castro told Victor Valley News.

“I said no, and he continued to say I had to pay for the damage and I told him to call the cops.”

The manager later reached out to Castro on Facebook apologizing for his accusations in a private message.

The pump has since been taken out of service by the management of the gas station and was taped off with caution tape as of Saturday.

It is unclear how long the skimmer might have been in place, but Castro felt that it was important to let others know. His video on Facebook has over 55,000 views.

When Victor Valley News reached out to the management team of the gas station, a woman who answered the phone identified herself as a manager and said she was not able to comment on the situation.

Castro did not suffer any losses since he immediately called his credit card company to have the card closed.

Here are some helpful tips to protect you at the pump;

— Try to use a gas pump closer to the front of the store, as thieves often place skimmers farther away so they aren’t noticed as quickly
— If using a debit card, choose to run it as a credit card instead of entering a PIN
— Monitor bank accounts regularly to spot any unauthorized charges