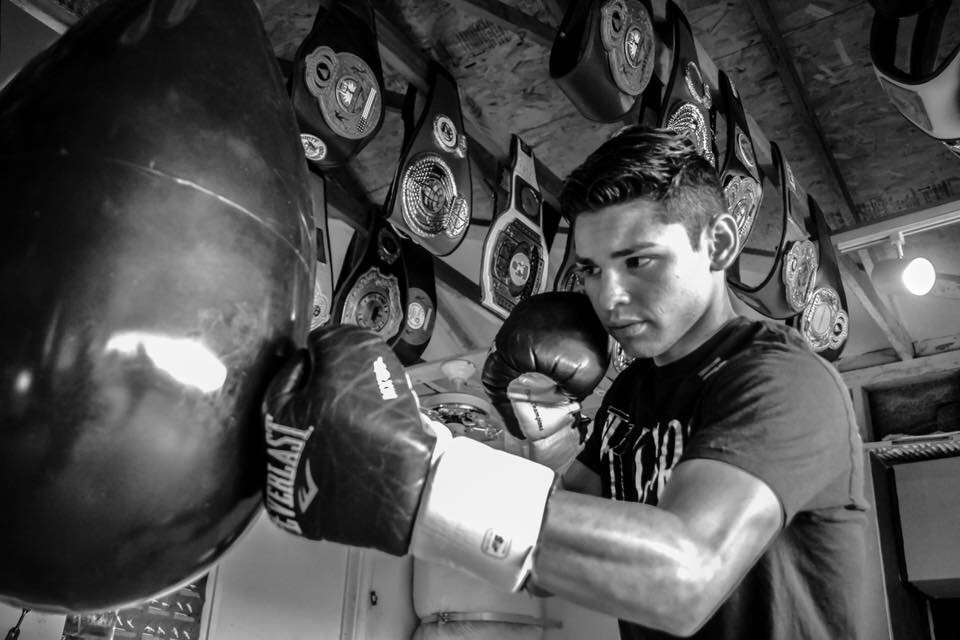 On a warm fall evening in Victorville, California, “King Ry” Ryan Garcia is finishing up a long day of training in his garage for his upcoming bout December 17th where he’ll make his HBO debut on the Bernard Hopkins Vs Joe Smith, JR. undercard. For Garcia it will only be his third professional bout on US soil as his opponent is yet to be announced. Garcia was surprised by his team earlier this week as Oscar De La Hoya announced that Golden Boy Promotions had signed him to a promotional deal. Garcia who was too young to compete in the 2016 Summer Games in Rio, turned professional at the age of 17 this past June in Tijuana, Mexico. Garcia who is managed by Roger Ruiz, won his first four bouts in Mexico before making his US debut against Puerto Rican Jonathan Cruz in August at the Exchange LA. Now Garcia, 6-0, 5 KO’s looks to keep his undefeated streak alive and impress boxing fans with a solid performance on December 17th . This evening I spoke to Garcia and his manager Roger Ruiz, and was informed that the “Golden Boy” Oscar De La Hoya has taken a major interest in his young blue chip prospect and will be personally training Garcia, making Garcia the first ever boxer De La Hoya has trained. “due to his style and his amateur background Oscar will be holding personal training sessions with Ryan” stated Ruiz. When I asked Garcia about signing with Golden Boy Promotions he stated “Oscar De La Hoya has always been one of my boxing idols, working with him and his company is a dream come true. I’m super excited and really happy to have this opportunity.” his manager Roger also let me know that Ryan is being sponsored by Jack Victor a leading North American manufacturer for men’s tailored clothing that was started in 1913 and has provided suits for the likes of Elvis Presley, Bob Hope and Frank Sinatra. As Roger stated “Ryan is going to look sharp inside the ring and even sharper after the fights.” Golden Boy Promotions and Ruiz hope to have Garcia finish off 2016 with a strong performance and fight at least six times in 2017 including a bout on a Saul “Canelo” Alvarez undercard.

Recently I was at the Garcia home and spoke with Ryan’s mom Lisa who had a hunch from an early age Ryan and his younger brother Sean were bound to be fighters “Ryan and Sean used to watch Ninja Turtles and copy the moves from the TV, I didn’t know they’d be boxers but I knew they’d use their hands for something,” said Lisa. At the age of seven Ryan began to box. Ryan who has been trained by his father Henry Garcia, Jason Engleson and the legendary Andy “Pops” Anderson is a 15 time National Champion and had over 200 fights in the amateurs going 200-15 in a span of 10 years. For the Garcia family boxing has been a way of life. The Garcia family moved to the High Desert 13 years ago and for the last 11 years Henry Garcia has used the family garage not only to train Ryan and his younger son Sean, but has trained several kids off of the street. “Our Garage was always full of kids, the city knew about it, but they also knew what we were doing was helping kids.” With Ryan turning professional there are less kids training in the garage, but as I was interviewing Ryan the garage began to fill up with local boxing prospects. The Garcia family hopes they will have a chance to build a gym in the future. Besides opening up the garage to neighborhood kids, Ryan’s mother Lisa volunteered with USA boxing and judged over 500 amateur bouts. When I asked Lisa about her feelings seeing Ryan in the ring she told me “you never get accustomed to it, I always have concern for his safety.”

Ryan who grew up idolizing the “Golden Boy” Oscar De La Hoya and Floyd “Money” Mayweather, recently sparred with the WBC World Lightweight Champion Jorge Linares, “Sugar” Shane Mosley, Haskell Rhodes and Yuriokis Gamboa. I spoke to Ryan about his amateur career and asked what the biggest difference between fighting amateur and professional is and he stated “In the pros, the fighters are a lot stronger, they pace themselves, these are grown men that know how to break you down.” he also stated “ in the amateurs you have to fight the best, sometimes you’re fighting five days in a row, you can’t duck anyone, the best have to fight the best.” In the amateurs Ryan fought boxing prospect Devin Haney five times beating him in three out of the five fights. Ryan fights at Featherweight and has trained at several gym’s in Southern California including Ten Goose, Robert Garcia Boxing Academy and the Wild Card. “I’ve got a lot of experience sparring champs and former champs, it’s really hard to find sparring partners in the High Desert, if we’re not sparring in LA we’re in Vegas.” Garcia is a natural boxing talent, who is charismatic, disciplined and has the confidence in himself to become a future World Champion and PPV Superstar. In closing Garcia said he’d like to thank everyone that has supported him through out the years and for all the youth of the High Desert he encourages them to keep pushing and never give up because “dreams do come true.”