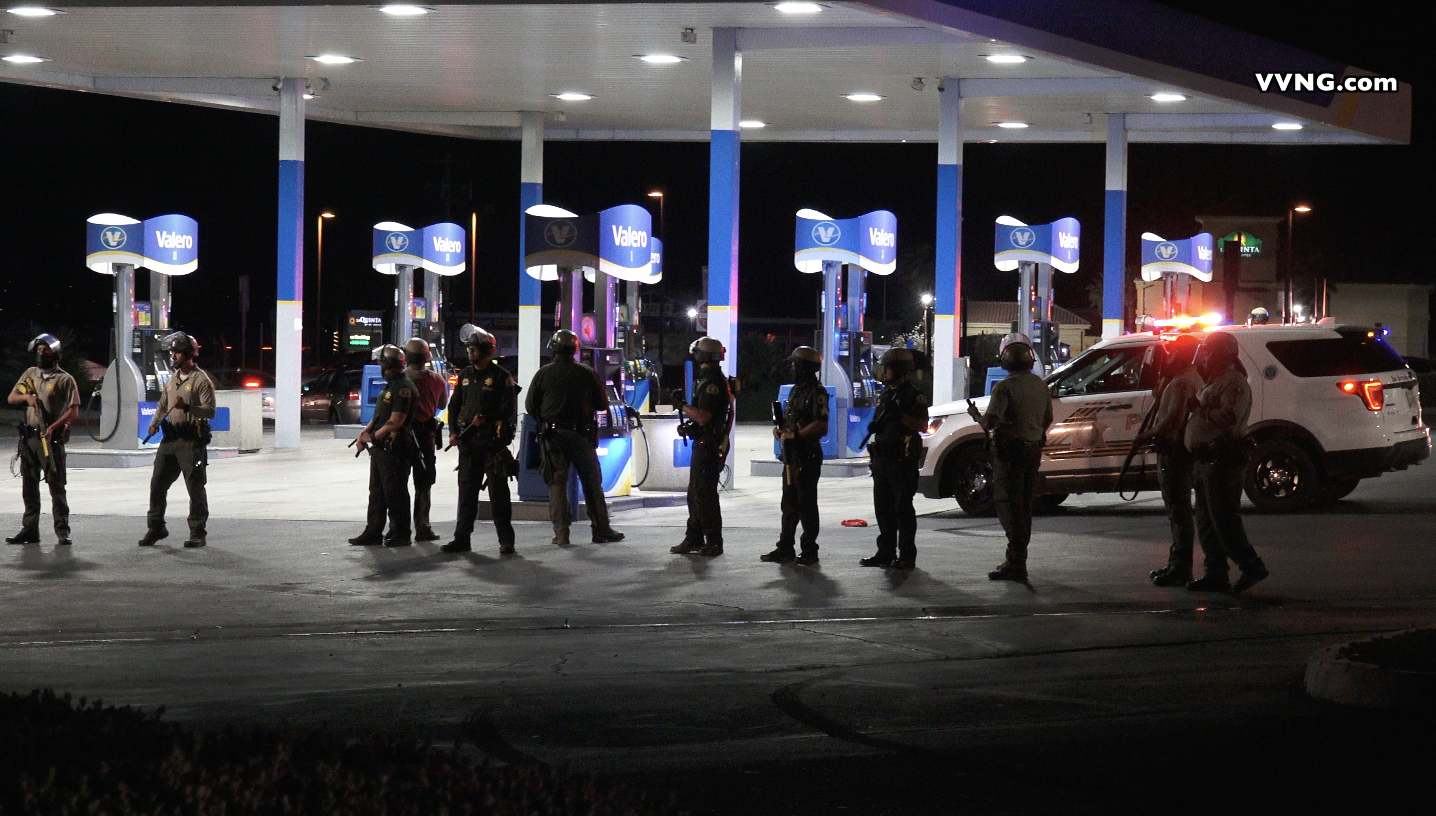 VICTORVILLE, Calif. (VVNG.com) — A Sunday afternoon of peaceful protest in Victorville broke at nightfall when a separate group of protestors clashed with deputies, throwing rocks and igniting small fires.

On Saturday, May 30th about a dozen protestors gathered at the corner of Amargosa and Bear Valley Road and demanded justice for the murder of George Floyd at the hands of a Minneapolis, MN police officer. The following day, the crowd was much larger with people of all ages, races, and walks of lives coming out to show their support.

Everything remained peaceful until about 10:00 pm Sunday when all of that changed after a large group of people that was not part of the original crowd showed up and began to disrupt the peaceful protest.

A witness named Travis told VVNG the group of looters initially planned on hitting the nearby Walmart but backed-off due to the police presence and that’s when things escalated as rocks were thrown at the patrol vehicles.

Cell phone video shared on YouTube showed a group of looters breaking out the windows of the Staples in the 14000 block of Amargosa Road as a small fire burned nearby. Travis said the same group shot a firework towards the front door of the Applebee’s as people were inside dining.

According to Travis, the looters began throwing rocks towards the police vehicles and that’s when deputies used rubber bullets and fired at the unruly crowd causing them to disperse and run in various directions through the shopping center and across the street into the parking lot of the Mall.

A sheriff’s helicopter circled above and commanded the crowd to leave or they would be arrested for participating in an unlawful gathering. Officers in riot gear were involved in a brief stand-off with a small group of protestors in the Valero gas station. The crowd eventually left and ended without any incident.

At least one deputy sustained an injury and medical aid was requested to check out the deputy, according to scanner traffic.

As the crowd dispersed from the area deputies actively began patrolling the nearby shopping centers searching for signs of looting.

A large rock was thrown through the glass door of the JC Penny but it did not appear any entry was made. Deputies also responded to Big 5 and found damage to the front door, it’s unknown if an entry was made.

Unfortunately, deputies couldn’t be everywhere at once and several businesses in Victorville were either burglarized or damaged as a result of the Sunday night looting.

Amongst them is Curt’s Pharmacy, on 7th Street that is a proudly black-owned small business. Looters broke the glass windows and gained entry into the store. The owner’s arrived shortly after to assess damages and determine what was stolen. The owner told VVNG what’s happening is heartbreaking and people are using the protest as an excuse to loot because they know cops are busy.

As a precaution, Walmart stores across the High Desert made the decision to close at about 530pm on Sunday, after receiving word of a flyer on social media promoting looting specifically at the Walmart on Highway 395. Target stores followed suit and made the decision to also close early.

The Vallarta Supermarket on Mariposa Road took no chances and boarded up their doors and windows after also receiving word of potential looters hitting the store.

VVNG has reached out to sheriff’s officials to find out how many businesses were damaged/burglarized and if any arrests were made. Additional information will be updated as it becomes available.