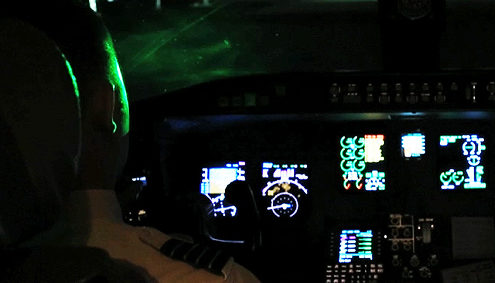 The sheriff’s aviation helicopter more commonly known as ’40 King 4′ was on patrol over the City of Victorville when the crew was struck multiple times by a high powered green laser, officials said.

According to a sheriff’s news release, the crew immediately utilized their infrared camera and night vision goggles to locate the suspect.

On February 27, 2020, deputies from the Victorville City station responded to the 14000 block of Ritter Street and detained multiple juveniles at the location.

After an investigation, deputies were able to recover the laser used to point at the helicopter from one of the juveniles.

The 17-year-old male juvenile was subsequently arrested and cite released to his parents for a violation of Penal Code Section PC247.5, Discharge a Laser at Aircraft, which is a felony.

The San Bernardino County Sheriff’s Department would like to remind the public that pointing any kind of laser at an aircraft in motion/flight can cause injury and seriously hinder the pilot’s ability to safely control the aircraft.

It is a felony and a federal offense.

No local coronavirus cases in the Victor Valley