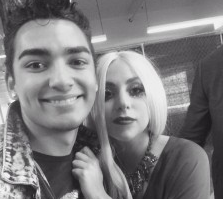 VICTORVILLE-(VVNG.com): We all have a story to tell about our youth, some more interesting than others, some with moments more defining than most. For 18-year-old Joshua Speiginer his

freshman year was one to remember, not because of the many fun experiences high school brings, but because of intense bullying.

The bullying Joshua faced was due to many things including how he dressed, how he acted and who he chose to have relationships with.

The attacks went from verbal to physical with the school according to Joshua, doing less than he had hoped they would to protect him from these attacks.

“Due to the zero tolerance, not only the bully gets suspended, but the person bullied also does,” said Joshua.

The final thing that happened that made Joshua and his mother realize that a change was needed was when Joshua was jumped by a large group of teens that were recording the attack.

Joshua’s mother, who worked in Anaheim gave him the choice of several schools in that area that he

could transfer to. He chose Century High School in Santa Ana since it was a smaller school. Joshua attended school there for two years and during that short time he was able to provide support to other teens that also had been bullied through most of their middle and high school career.

Joshua returned to Silverado High school in Victorville for his senior year because he felt as though he was now strong enough to deal with the bullying and so he could graduate with the people that he grew up with.

“I have the same friends since middle school, I do not think I would have made it through middle school without them. It is not like bullying has gone away completely, I am just stronger than I used to be.”

Not only did Joshua provide support, but he provided an outlet for these students to get together and

express themselves through dance. About twenty-five students, most who have had little to no dance experience have joined the dance crew “The Auras”.

The Auras motto is “fighting for those without a voice”.

“They decided on the name based on the definition of “Aura”- “the distinctive atmosphere or quality that seems to surround and be generated by a person, thing, or place,” said his mother. Christel Valle-Reyna.

”I want this to show them that they are okay being who they are,” said Joshua.

The club Joshua runs is ran through Silverado High School, all the funding and other assistance they receive is by private donation of time or materials. The team has been working hard practicing for an up coming performance in April for both the school and the public. The word about the team has spread and they have been asked to also perform at Oak Hills, Granite Hills as well as a Santa Ana High School.

Joshua feels that his high school experience has improved partially because of his personal strength and partially due to a new school principal.

On February 8th,  Joshua has had the opportunity to meet Lady Gaga outside of the Staples Center as she entered the building for the Grammy Awards. Lady Gaga has been someone he has really looked up to and now someone who he was able to share

what his dance team is doing.

“I was there as they drove up, I called her over and was able to meet with her for a few minutes. She loved the message we are working to spread”.

Joshua’s mother explains her pride for what her son is doing, she has explained that their entire family has stood behind him in support.

“My parents are making stop signs with the stop the bullying message on them as we speak, my cousins are out scouring businesses to find a place to host a car wash so we can raise funds to have additional materials printed. The dancers are working on letters to government and school officials to rally additional support. My little ones are sticking address labels on envelopes,” she said. “It is my hope that if my son and this group of young people can open the eyes of just one more person to embrace the differences of others in a positive way, our society will reap the benefits in the long run!”