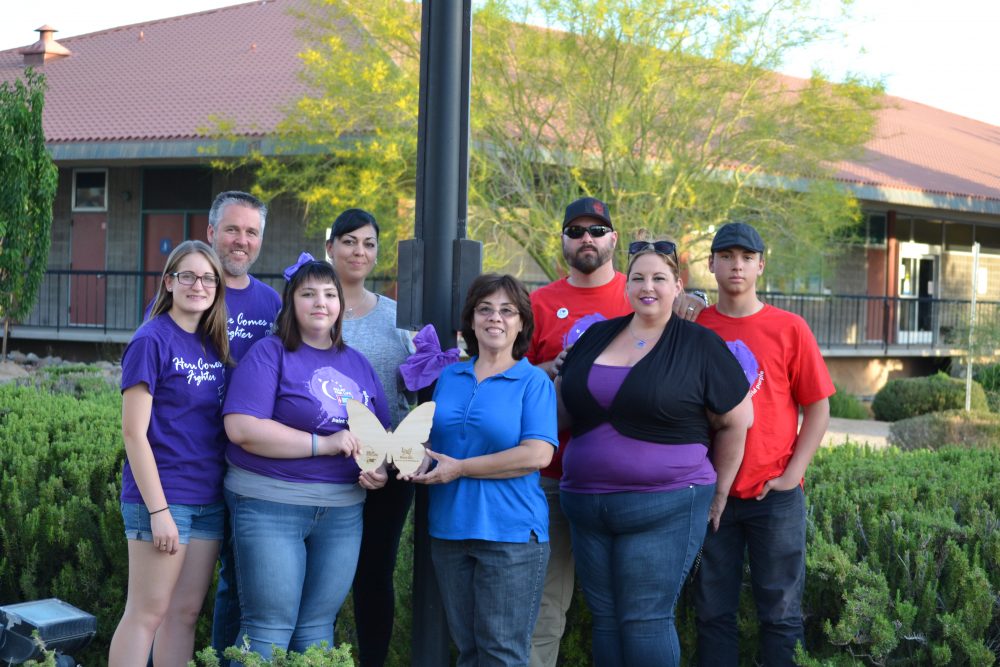 VICTORVILLE:(VVNG.com)- The town is being painted purple! Relay for Life of Victorville’s theme this year is Paint Your World Purple.

“Purple is the universal color to represent all cancers,” Mina Breitel informs us, team leader of the Yours, Mine, and Ours relay team raising awareness for prostate cancer. The meaning behind the team name is to represent their support for everyone’s strenuous  journey with cancer.

Join the cause this weekend for the 24-hour event taking place at VVC. The opening ceremony begins at 9 a.m. followed by laps for cancer survivors, caretakers of cancer patients, a Luminaria in honor of those lost, and the closing ceremony which takes place Sunday at 8:30 a.m.

Everyone has their own different, or similar, reasons for taking part in Relay for Life. Christina Norris relays for her daughter Kayla Norris who, at the young age of 15 years old, was diagnosed with brain cancer. Doctors predicted she wouldn’t make it beyond 3 months, but she’s going to be celebrating her 21st birthday this year in August! Christina Norris is the team leader of Team Kayla Never Give Up Hope raising awareness for brain cancer.

Relay for Life is a support system and a symbol of hope for many people. It’s not all just mourning, it’s celebrating everyone in the fight and educating the community in hopes to raise awareness. A portion of the proceeds stays within the city and another portion goes to research and resources provided by the American Cancer Society.

There isn’t always warning signs with cancer, the best way to catch it is through early detection and staying fit. For example, attending all your health exams and physicals, eating healthy and exercising regularly.

“Many cancer deaths could be prevented by making healthy choices like not smoking, staying at a healthy weight, eating right, keeping active, and getting recommended screening tests.” (cancer.org)