HESPERIA, Calif. (VVNG.com) A murder suspect who was wanted for the shooting that killed a man and left another person fighting for his life has shot himself.

On Friday, July 7, 2017, Law enforcement officers were attempting to take David Salazar, 22, into custody when Salazar shot himself in an attempt to take his own life.

Detectives were at a Hesperia home at around 3:30 p.m. to make an arrest on charges related to the murder of 59-year-old Daniel Thomas Flury, Aka “Pops”, who was killed yesterday near Hesperia Road and C Avenue while his son, Daniel Flury Jr, was shot 6 times and flown to a trauma center.

As authorities made contact with Salazar he attempted to flee on foot towards Timberlane and Pine Street. Salazar drew a gun during the foot pursuit and held it to his chin then shot himself, a witness told Victor Valley News.

Salazar was airlifted to an out of area trauma center where his condition remains unknown at this time.

According to booking logs, Salazar is being booked for PC 187 Murder and is not eligible for bail. He is scheduled in court for arraignment on Tuesday, July 11, public court records indicated.

The Flury family said a detective informed them on Friday evening about the arrest made.

“We’re glad an arrest was made, but it doesn’t change the fact that Pops is gone and that Daniel is still fighting to breathe on his own,” said a family member of the victims in yesterday’s shooting.

It’s unknown if detectives are searching for another suspect at this time. Authorities have not released a motive for the shooting. 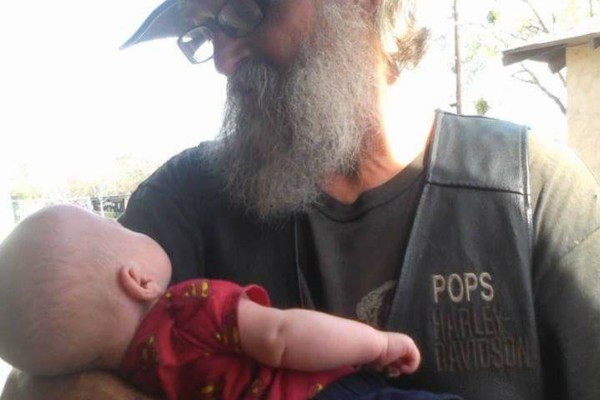 Daniel Flury Sr, Known as Pops, was shot and killed in Victorville on July 6, 2017. (Credit: Go Fund Me)