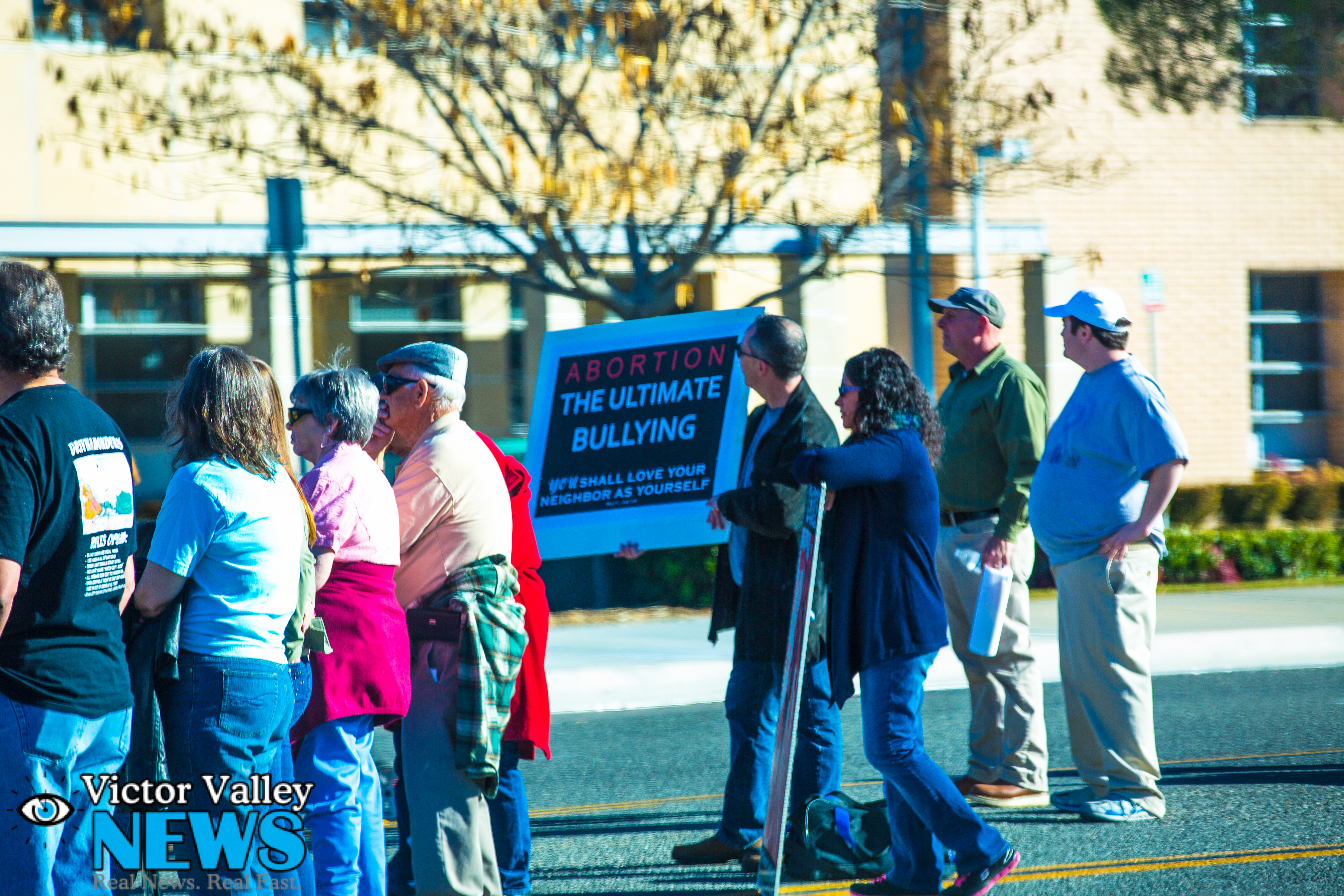 VICTORVILLE-(VVNG.com):  The 3rd Annual Victorville Pro-Choice “March for Life 2015” event took place on Saturday, January 17th, starting at the Victorville City Hall. The peaceful meeting and march aimed to protect the lives and rights of unborn children was deemed by supporters as a great success. While some were for the march and it’s mission, there was some opposition from those that that felt the choice of women was being questioned or targeted by such an event.

The topic of abortion, always, regardless of where you are, is a passionate one causing controversy and strong emotions from all angles.

“There’s enough people leaving their children in dumpsters to die at least if they’re getting an abortion and not leaving kids to die. Or having these kids in foster care jumping from place to place. Come on its there life there child leave it alone,” said Tawni MCneely on a Victor Valley News post.

“It’s sad when people don’t consider the innocent baby that is violently ripped in pieces from the womb of their mother. Abortion is disgusting and inhumane,” said Amanda Jarrell a Victor Valley News group member.

The March for Life event in Victorville had a turnout, which for a smaller U.S. city, was considered a great success with over 50 attendees. Attendees including city Mayors, Congressmen. City Council members, church members and many others in the community who all joined for their mutual goal.  There were several speakers who attended the march including Danielle Versluys, the director of Stanton Healthcare of Southern California. Versluys, shared that she plans to have her mobile clinic which performs free pregnancy exams including ultrasounds, placed near the Planned Parenthood in Victorville.

March for Life, an “Education and Defense Fund” began with their first March back in 1973, the year the United States Supreme court made abortion legal and available on demand throughout the United states after the Roe. V Wade decision. The first march was a small one that took place in Washington, D.C. The goal of March for Life is to continue to fight to inform the public on how they can help fight for the overturn of Roe v. Wade. (information provided by: https://marchforlife.org)

One thing is for sure in the pro-life and pro-choice movements. opposition is always and will always find it’s place. “Politicians in Congress, and state legislatures, who further hostile attacks on women, including limiting access to abortion, contraception, and to reproductive-health care facilities, will find themselves losing support as voters get behind leaders who want to make progress as a nation. Who Decides? exposes the politicians across the country who don’t trust women to make decisions about our bodies and our lives.” said Ilyse Hogue, president of NARAL Pro-Choice America. (https://www.prochoiceamerica.org January 14, 2015 press release)

Barstow Principal Arrested on Charges of Having Sex with Student