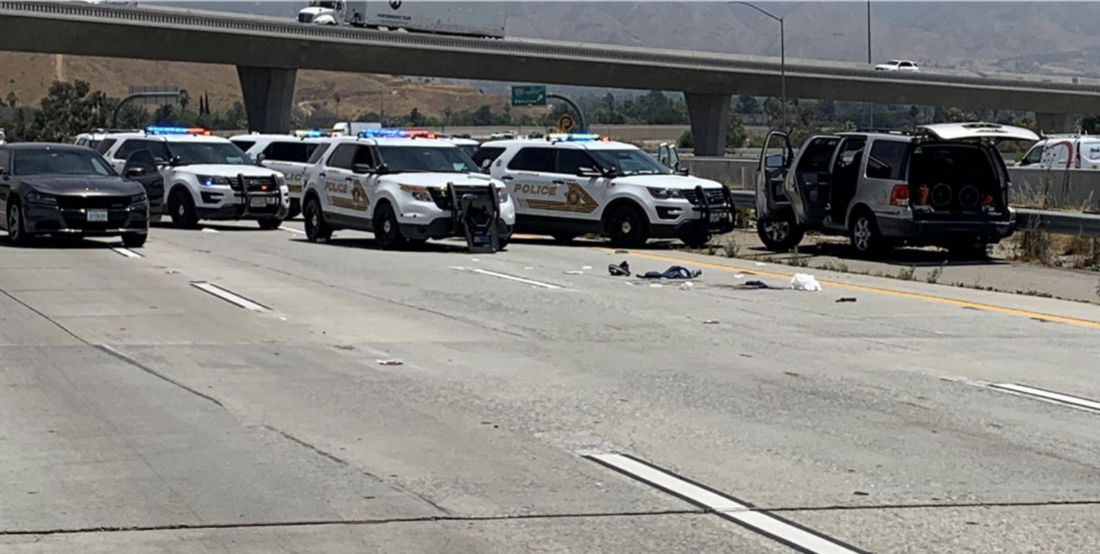 SAN BERNARDINO, Calif. (VVNG.com) — A high-speed pursuit that started in Victorville ended with an officer-involved shooting on the I-210 freeway after the suspect exited the SUV and allegedly pointed a handgun at deputies, officials said.

On Wednesday, June 24, 2020, at 9:36 a.m., a deputy from the Victorville Police Department responded to the 13800 block of Ashmont Street following the report of a suspicious vehicle in the neighborhood.

According to a sheriff’s news release, when the deputy attempted to contact the driver, later determined to be 31-year-old Skyleur Young, he fled, and a pursuit ensued.

Young traveled through Victorville and eventually entered the southbound Interstate 15, traveling at a high rate of speed. The pursuit ended on the westbound 210 freeway, just west of the 215 interchange, after the vehicle spun out and came to rest facing the opposite direction.

“Young exited the vehicle and within moments turned toward deputies, pointed a handgun at them and a deputy-involved shooting occurred. Deputies immediately provided medical aid until paramedics arrived and Young was transported to a local hospital,” stated the release.

No deputies were injured during the incident. Young was the sole occupant of the vehicle and his medical condition is unknown.

The handgun was recovered at the scene and photographs of the handgun and scene are attached.

The investigation is ongoing and anyone with information, or anyone who witnessed the incident, is asked to contact Detective Eric Ogaz, Specialized Investigations Division at (909) 387-3589. Callers can remain anonymous and contact WeTip at 800-78CRIME or www.wetip.com.

Related Topics:210 freewayOISShooting
Up Next