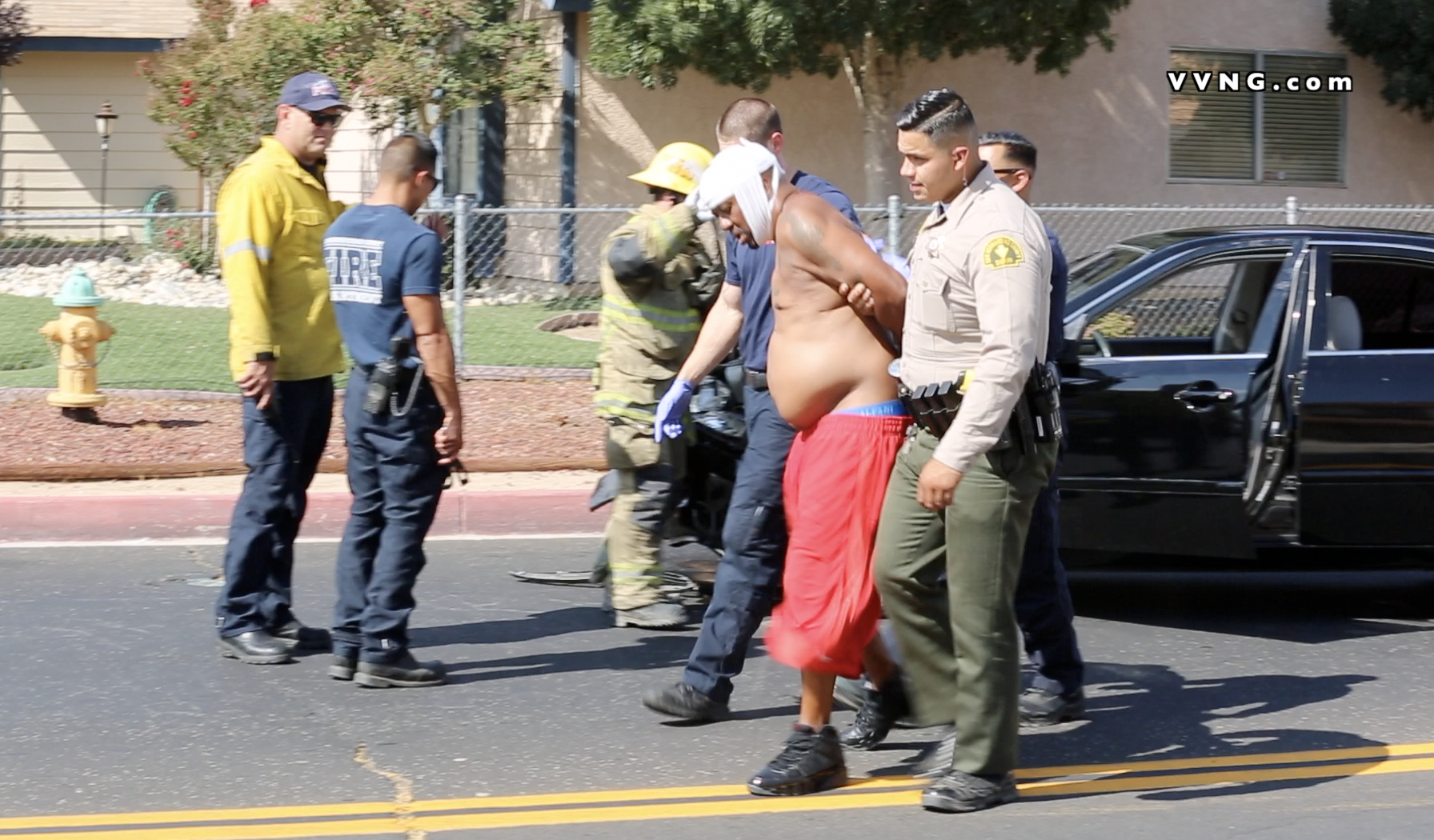 UPDATE 8/20 @ 9:20 AM– During the investigation, it was determined Pink Wright was the driver of the 2007 Kia Optima that collided with three vehicles, in separate incidents.

At approximately 3:22pm, Wright ran into the rear of a 2016 Ford Flex near Luna and fled the scene. He then collided with a 2012 Nissan Altima that was traveling south on El Evado, and again fled the scene.

At approximately 3:27pm, Wright rear ended a 2015 Kia Sedona at the intersection of Northstar and Petaluma. The vehicle Wright was driving had major damage and Wright was located at the scene.

None of the occupants of the vehicles hit by Wright requested medical attention. Wright was seen at a local hospital for an injury to his head. He was then arrested and booked at High Desert Detention Center for driving under the influence. The case will be forwarded to the District Attorney’s office for review and consideration of additional charges.

According to public court records, Wright has a lengthy past involving arrests for driving while under the influence, the most recent conviction in December 2014. The case was filed in San Bernardino Superior Court, where he was charged with DUI, driving while license was suspended for a previous DUI, failure to install an ignition interlock device. A plea bargain convicted him of Drive Under Influence Alcohol/0.08% Or More, but dismissed the ignition device and other charges. He was sentenced to 3 years in State Prison, with the usual 50% credit.

In  February 2006, he was arrested for DUI and for driving while license was suspended for a previous DUI. He was convicted of the DUI. A previous probation was continued, and he was ordered to attend a county approved alcohol program. By 2008 it was realized that he had not completed the program. He was already in prison for something else. That, and previous cases, were in LA County.

VICTORVILLE, Calif. (VVNG.com) — A 60-year-old Victorville man was arrested for DUI after slamming into the back of a minivan Friday afternoon.

It happened August 17, 2018, at about 3:30 pm, at the intersection of Petaluma Road and Northstar Avenue in Victorville.

Based on preliminary reports, the minivan was rear-ended by the sedan as it waited at the three-way stop sign.

The driver of the sedan, identified as Pink Wright, was treated at the scene for a minor head laceration. After he was bandaged up, he was placed in the back of a patrol unit and subsequently arrested for driving under the influence with a BAC over .08, officials said.

According to public arrest records, Wright was cite released and is no longer in custody as of August 18, 2018, at 7:32 pm.

No injuries were reported by any of the occupants from the minivan.