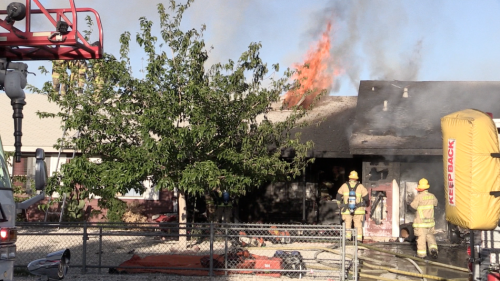 VICTORVILLE:(VVNG.com)- A family of five was displaced after a fire burned a significant portion of the home on Sunday afternoon, leaving the home uninhabitable.

On April 12, 2015 at approximately 5:40 P.M., San Bernardino County dispatch received multiple reports of a residential structure fire at the corner of Heritage Drive and Americana Street in Victorville.

According to ‎SBC Fire Dept. Public Information Officer Eric Spies, County Fire engine 313 was returning from a medical aid in the area and actually reported the smoke at the same time calls were coming into dispatch.

When firefighters arrived they found a single story, single family residence, a garage fully engulfed with flame and fire extending into the residence.

It took firefighters approximately 20-minutes to knock down the fire. “Firefighters were able to save a good portion of the house. It did have significant damage to the garage and the living quarters adjacent to the garage,” stated Spies.

According to a family member named Gabriela, she and her mother had just left the residence to go pick up some food. On their way back they saw smoke billowing into the clear blue sky. As they pulled up to the residence they saw huge flames coming from the garage and Gabriela began to panic.

“I knew my dad, brother Jesse, and my 11-yea-old son were inside the house. I didn’t know if they had made it out in time. I later found out Jesse told everyone to get out. Thankfully they were all able to get out in time.”

Gabriela was treated at the scene for high blood-pressure. She was able to stabilize her vitals after receiving confirmation her family was not injured

The American Red Cross was called in to assist the family with food, clothes, and medications. At the moment the family of five have temporarily moved in with a sibling into a small apartment. The family is currently needing assistance coming up with a down payment to move into a new place. After they come up with the amount they will need help with regular house hold items.

No civilians or firefighters were injured during the fire. At this time the cause of the fire has not been determined.