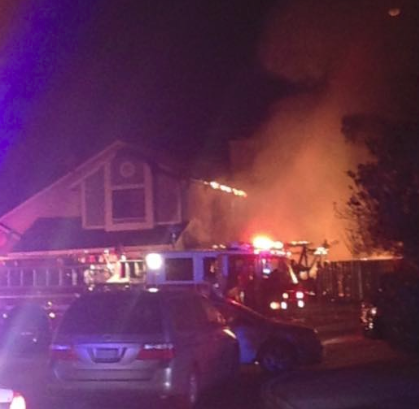 VICTORVILLE-(VVNG.com): At approximately 12:00 a.m. on December 1st, dispatch received a report of a fire in the area of Shooting Star and Galaxy from the reporting party that was a resident of a neighboring home. They reported hearing numerous explosions coming from the home. Subsequent calls came in reporting what was believed to be “gunfire”  due to the loud explosive sounds coming from the burning home.

The first on scene was a Victorville police officer, who worked on evacuating the home. The two-story single family home on the 12100 block of Shooting Star drive showed heavy flames coming out of the top and bottom floors. A van was pushed out of the garage of the home.

Building and Safety were requested on scene as well as an investigator and the Red Cross in order to assist 2 adult and 2 children. The family of four was displaced and the fire caused an estimated $80,000 worth of damage to the home.

At this time there is no information as to the cause of the fire, San Bernardino Fire Department is currently investigating. More information will be updated as it is received.