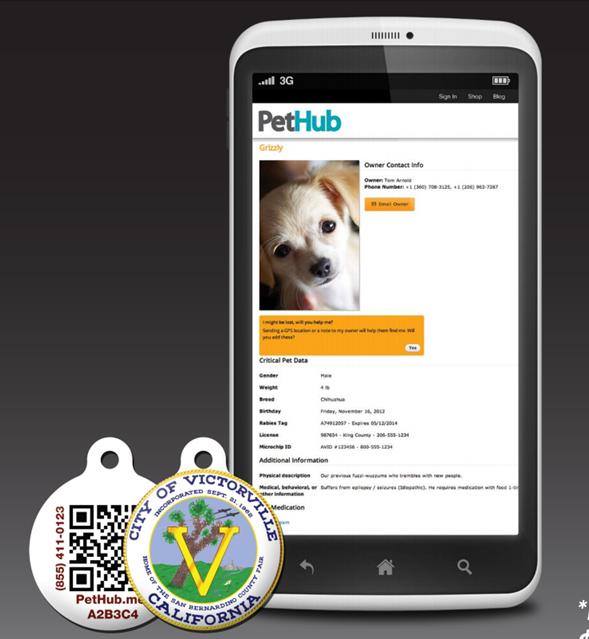 The City of Victorville, home to more than 7,500 licensed dogs, will employ the new digital technology to increase the chances of a lost animal’s return while reducing the number of animals in shelters.

“Recent statistics show that 96 percent of animals using the digital ID tags are returned home in less than a day and never enter a shelter,” said Guy Eisenbrey, Enforcement Manager with the City of Victorville. “This technology will be useful for pet parents in Victorville.”

“Over $2 billion is spent annually by shelters in the U.S. to provide food, critical care, and a safe bed to lost animals,” said Tom Arnold, Founder of PetHub.com. “Our goal is to get a lost dog or cat home before it can become injured through fights with other animals, taken in by strangers thinking the dog is homeless, or enter a shelter.”

PetHub’s system links a physical ID tag to an animal’s online profile that can be accessed through an encrypted connection by anyone with a mobile device, whether a smartphone or standard cellular phone. That profile can be updated free-of-charge at PetHub.com to allow the owner to list emergency contact information, including that of anyone who helps care for the animal, such as spouses, pet sitters, veterinarians, and other family and friends. Optional upgrades include “found pet” alerts, GPS notifications, and a way to broadcast a missing pet’s profile to local shelters and businesses (think “Amber alert,” but for pets).

The new licensing program will launch on Monday, Oct. 30 for animals living within the Victorville service area only. Dog licensing is available online through the City of Victorville website at www.victorvilleca.gov.

For more information about the new pet ID tag, call City of Victorville Animal Care and Control at (760) 955-5089.

About PetHub™
PetHub, Inc., is focused on getting lost pets home faster and safer than any other solution available by utilizing current and new technologies, including QR coded pet ID tags, NFC wireless technology, GPS mapping, and real-time notifications. 96% of PetHub recovered “pack members” are home again in under 24-hours. The company has multiple software and hardware patents pending on its ID tags and Internet services. Success stories can be found at https://PetHubFound.me. PetHub is available in English, German, French, Dutch and Italian languages.