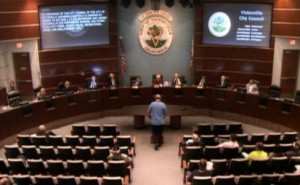 VICTORVILLE-(VVNG.com): The controversial smoking ordinance went for vote on Tuesday, January 20th by the Victorville City Council. The proposed ban was planned to be for regular cigarettes, e-cigarettes as well as vaping. Some welcome this ordinance, that includes all city parks including the park recreation area, sports fields and parking lots. The Victorville Community Service Advisory Committee proposed the ban at a city hall meeting several months ago with a 4-0 support of the ordinance.

At the meeting today according to Victorville City Manager, Doug Robertson, the smoking ordinance was adopted with the vaping section removed for the time being. The vaping portion will be sent back to the Community Services Advisory Committee for “further study and revision”.

Members from the  public spoke only in support of the ordinance at the city council meeting. Richard Bounds, an Ambassador for the American Cancer Society and representative for the Assembly 33rd District. “I am not against smoking, I am not saying people who smoke are bad,” said Bonds. “We should not being in a public place be subjected to someone else’s smoke.” Bounds mentioned the public concerns regarding the enforcement, but said he believes that most law abiding citizens knowing that there is in fact an ordinance will not smoke.

Robert Harriman also spoke on behalf of the ordinance. “Ten years ago, I was the VP of the Victorville Little 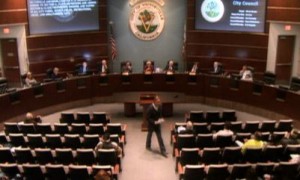 League. “I found it rather offensive to the kids and players when people were smoking in the park” said Harrimen.

City Manager, Doug Robertson spoke briefly stating that since the technology of e-cigarettes and vaping has changed, that he felt that portion should be removed from the voted portion of the ordinance , but revisited at another date. “The smoking ordinance was adopted but the vaping section was removed to be sent back to the Community Services Advisory Committee for further study and revision.” explained Robertson.

The city council took a vote on the ordinance, minus the e-cigarette and vaping portion, voting unanimously to adopt the ordinance. Enforcement will be done by no smoking signs and citations from law enforcement. Although, the reports of smoking in the park will not be a priority calls for law enforcement, they will respond to reports and those caught smoking at a park recreation area, sports fields and parking lots will be cited.

“It’s not immediate, ordinances have to have a second reading then take 30 days. They’ll (Victorville Community Service Advisory Committee) will study the effects and take another look at the definition sense the technology is rapidly changing” concluded Robertson.