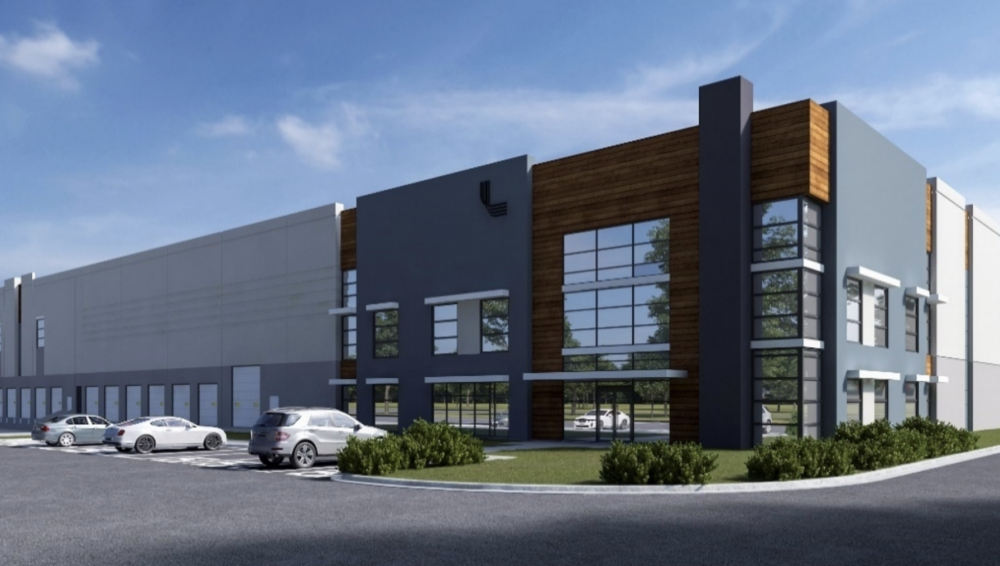 (Renderings submitted with this application of the Ottawa Logistics Center)

In addition to the approval of the site plan, the applicant, Space Center Mira Loma, received approval to combine 17 parcels to create one parcel approximately 52 acres in size, at a site located north of, and abutting Ottawa Street and east of Hesperia Road, in an area zoned for Heavy Industrial.

The building is slated to operate as a cross-dock warehouse with the overall facility providing 306 truck-trailer parking spaces and 328 passenger vehicle parking stalls provided.

The color palette of the exterior design will primarily consist of shades of grey and white with the use of faux wood siding in a walnut color to accent the main building entries, with reflective blue glass incorporated to provide additional contrast.

The new upgrades in the area will include a traffic signal at the intersection of Hesperia Road and Ottawa Road.

Several members of labor and trade unions spoke in favor of the project during the meeting, citing the potential for employment and economic growth for construction workers.

“It’s seldom that an opportunity like this reaches up here, but when it does it is very serious for the community, because of the need for good-paying jobs with benefits. There are many local young people praying for an opportunity like this to get one of these projects to start their career and be able to support their families efficiently,” said Jason Valles, who represents the Labors International Union of North America of San Bernardino and Riverside.

“And when we leave, we will leave a well beautifully built establishment that will provide jobs,” Stated Valles.

Other speakers in support included members of Southwest Mountain States Regional Council of Carpenters, Iron Workers Local 433 and 416 of Riverside and San Bernardino Counties, the Plumber Pipefitters and Refrigeration of San Bernardino, and the Carpenters Local Union.

“This developer has committed to building this project with a skilled and trained workforce, and not some out-of-state contractor,” another speaker said.

The operation and maintenance of the Project would generate approximately 834 jobs, the City estimates based on available data, however that number can change.

The future tenants of the proposed building are unknown at this time.