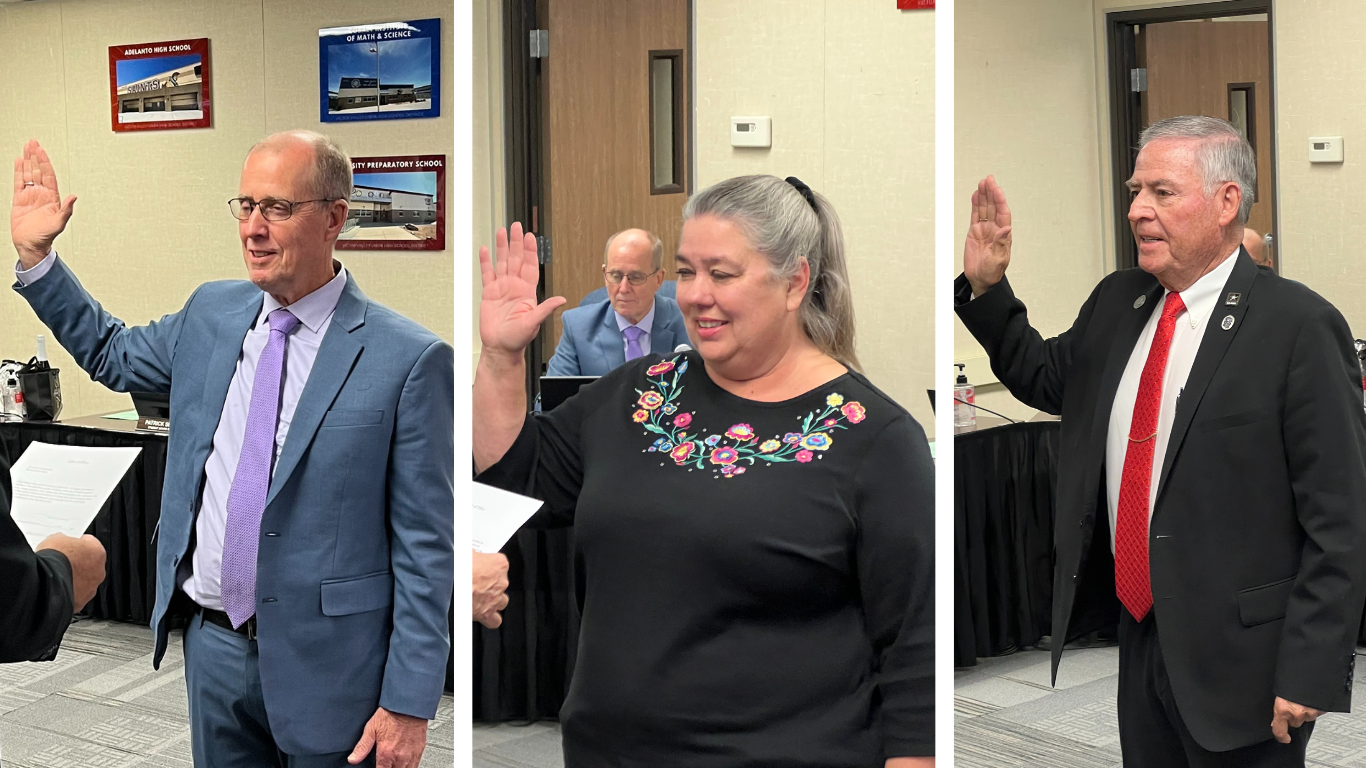 “Both Mr. Crosby and Mr. Hinojos have roots in this community, and I know they care deeply about this district and its stakeholders,” VVUHSD Superintendent Carl Coles said. “I’ve had an opportunity to talk with both of them, and I am looking forward to forming great partnerships with them to serve our students, staff and families.”

After swearing in the new members, the board also elected its leadership positions Thursday, naming Penny Edmiston as President, Barbara Dew as Vice President and Jose Berrios as Clerk. Edmiston, an incumbent who ran uncontested in the election, was also sworn in for another four-year term.

“I look forward to working with both of our new board members — Rosie Hinojos as a former board member and Personnel Commissioner and Kent Crosby as a well-respected teacher and administrator of the district,” Edmiston said.

Hinojos, a 1961 graduate of Victor Valley High School, retired after a long career with Southwest Gas. He was appointed as a VVUHSD Trustee in April 2016 before losing his seat in the November 2016 election. He also briefly served on the VVUHSD Personnel Commission before it was dissolved last school year.

“First and foremost, I’m grateful and honored that the voters out there selected me,” Hinojos said. “I’m looking forward to working with the current board members and Mr. Coles to make our district the best for students as well as our staff.”

Crosby was a longtime teacher at Victor Valley High School before becoming Principal of Lakeview Leadership Academy. He led the newly established Victor Valley Virtual Academy in the 2020-21 school year before retiring from the district.

“I am excited to be working with the outstanding board members of VVUHSD as we strive to provide the best educational experience for our students,” Crosby said.

In November, Crosby defeated incumbent Caleb Castenada with nearly 56 percent of the vote, while Hinojos won with more than 53 percent against incumbent Joshua Garcia.

“I would like to thank Mr. Garcia and Mr. Castaneda for their service to our district, and I wish them all the best in the future,” Coles said.

Santa lands at Providence St. Mary in a REACH helicopter