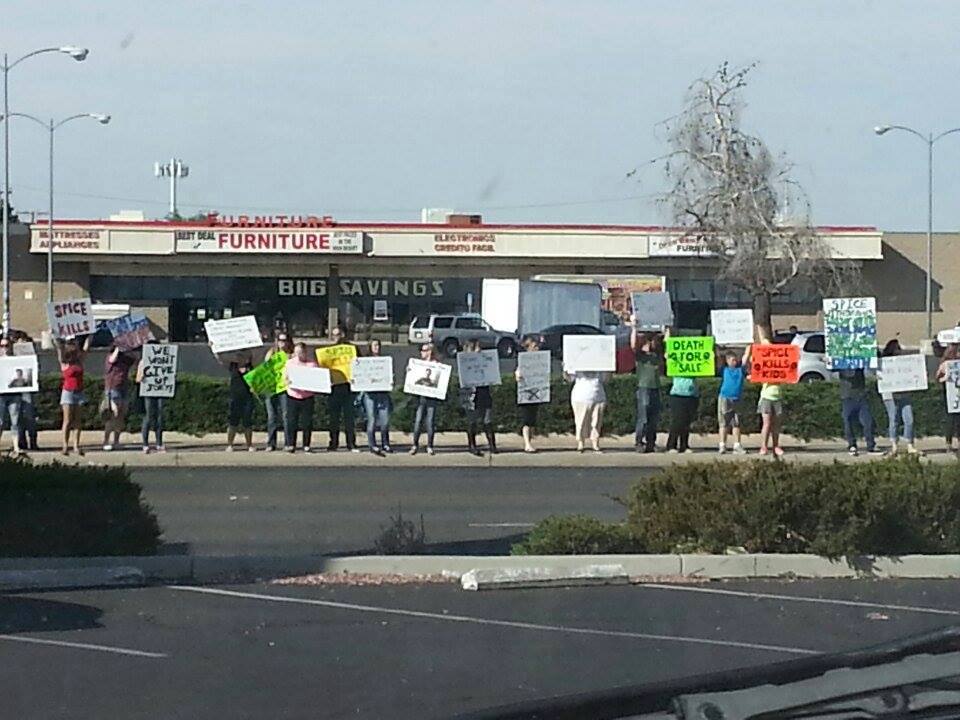 VICTORVILLE: (VVNG.com)- Protesters lined the streets of 7th Street and Plaza Center Drive in Victorville to protest the sometimes legal, but seemingly dangerous drug referred to as “spice”.

Spice is manufactured to be sold as a “synthetic Marijuana” and is said to cause similar mind altering effects. These drugs are labeled “not for human consumption” and go by several names such as, K2, Yucatan Fire, Skunk Spice, Blaze, Red X Dawn, Bilss, Black Mamba, Bombay Blue, Fake Weed, Genie, Spice, Zoh and Moon Rocks. Most of these drugs come in packs that seem to be marketed toward underaged individuals, some packages even containing pictures of cartoon characters or other colorful images. This product claims to be natural but has been tested with results showing otherwise.

As the National Institute of drug abuse states on their website: Spice abusers who have been taken to Poison Control Centers report symptoms that include rapid heart rate, vomiting, agitation, confusion, and hallucinations. Spice can also raise blood pressure and cause reduced blood supply to the heart (myocardial ischemia), and in a few cases it has been associated with heart attacks. Regular users may experience withdrawal and addiction symptoms.

Many find that the dangerous health effects and risk of death is much higher with Spice than with marijuana, which in most instances is still not legal to sell. Sale or distribution of marijuana to minors is a felony under Health and Safety Code 11361.

There has been evidence that spice has led to deaths, some of whom were minors. Spice is currently still being marketed and sold to minors in many local Smoke Shops. Victor Valley residents do not want these products readily and legally available, especially to minors. “Stop buying it. Stop smoking it. It kills. The withdrawals can cause depression, thoughts of suicide, no appetite, psychological illnesses and seizures. That smoke shop sells it to minors and adults. It’s illegal and it needs to get off of our streets before there are more deaths or suicides.” said Victor Valley News member, Daron Sikoff.

The DEA has made five of most commonly found active chemicals in spice Schedule I controlled substances, making them illegal to sell. Manufacturers continue to remove those particular ingredients and replace them with other active chemicals that are potentially just as dangerous in order to continue sales. Spice does not cause a positive drug test result, so although the dangers are proven, it is what many choose to abuse rather than it’s possibly safer natural counterpart.

Links to previously shared articles regarding the illegal sale of spice in the Victor Valley: