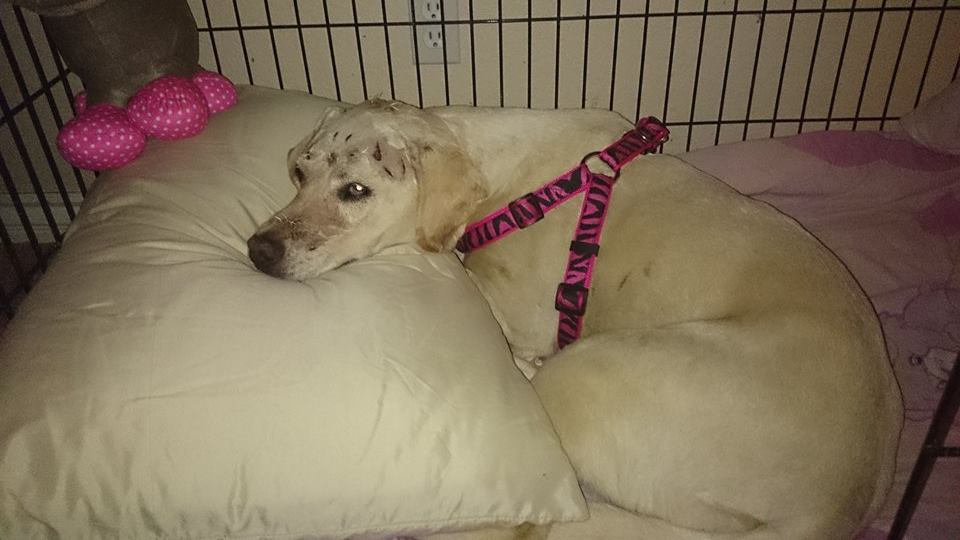 (VVNG.com)- Meela, an approximately 3-year-old yellow Labrador mix was found on July 10th at 11:59 a.m., by Victorville resident Wendy Sausedo, a volunteer for Purrfect Pet Kitten Rescue. Sausedo tried to help the ailing dog, that was found lying by her garage, but because of her small size and a back injury she was unable to lift Meela to get her into the vehicle and transport her to Ark Animal Hospital.

Sausedo contacted her friend Nicole Larr, to seek assistance but she was about 45 minutes away from the home of Sausedo and was concerned she would not make it on time to save the dog. “He is breathing, but very loud and heavy. I didn’t get too close to him, but when I stood in front of him he didn’t move his head to look at me. He looks a combination of very old, beat up and possibly dying,” described Sausedo of the condition of the dog, whose health seemed to be rapidly declining.

Larr felt helpless because of her distance from the dog, but was unwilling to give up, she reached out to Victor Valley Pets, a Facebook group with over 6,700 members. At 12:43 p.m., Victor Valley Pets member, Rachael Hughes got to the home of Sausedo to help lift the mostly unresponsive dog into the vehicle that would be transporting her to the veterinary clinic.

The lab, who they later found out is a female, suffered from eye injuries, a detached nose as well as other abrasions mostly concentrated to her head, neck and face area. At the time of the initial consultation from the veterinarian, they felt she would lose her right eye.

All of the updates were made by Nicole Larr, describing the condition to the group of people who were very touched by Meela’s story. Many members asked where they can donate to help Meela, who was now being treated at Ark Animal Hospital in Victorville. The following day the condition of Meela was stable and she was walking, but still had injuries that required further veterinary care.

On July 12th, Meela was ready to leave the veterinary clinic. When Larr was made aware of her microchip she was ecstatic hoping she would soon be reunited with the owners who had to love her. Upon contact, according to Larr, their interest in her condition or even excitement she was found was mostly non-existent. The Purrfect Pet Kitten Rescue took responsibility and temporary ownership over her since her previous owners, who had adopted her in October 2013, surrendered her over to them.

Meela returned to Ark Animal Hospital the following day after release because she was not eating or drinking. She was put on IV fluids. With the help of Ark Animal Hospital and help from the community via donations Meela again is eating, released and her eye that they thought she would lose has been saved. The dog that they once thought was dying is now expected, with time, to make a full recovery.

The outlook for Meela is good now that she is in the hands of a caring rescue. They are unsure of exactly what type of animal she was attacked by, but her condition shows wounds that an animal control officer found to be consistent with a Mountain Lion attack.

If you would like to find out more about Meela’s progress or would like to see how you can help, please like the Purrfect Pet Kitten Rescue page on FB.