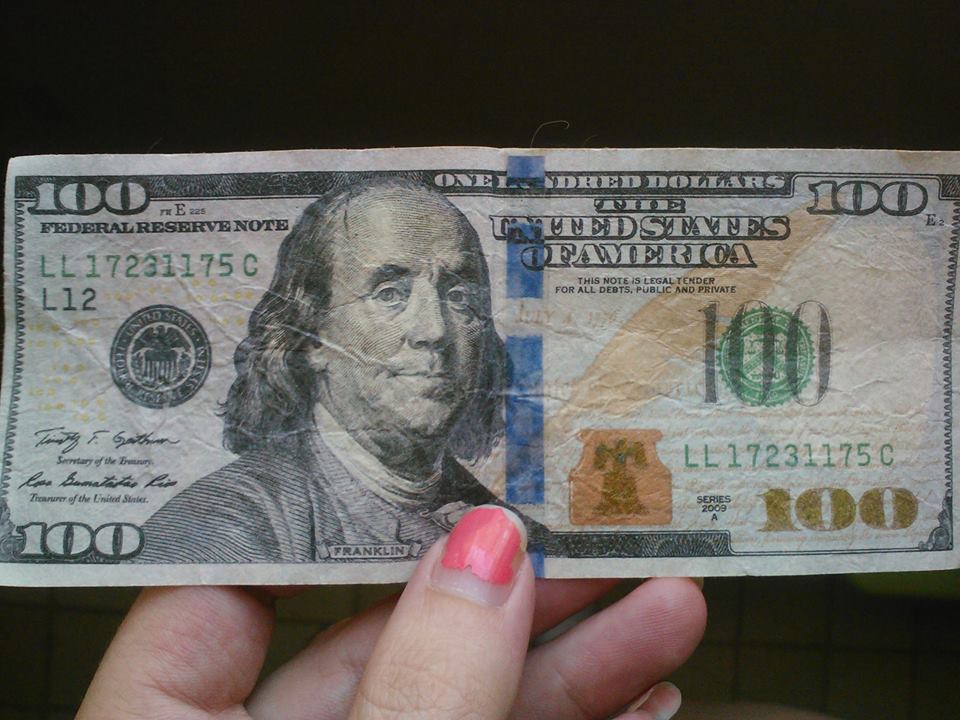 Counterfeit $100 held to the light.

HESPERIA:(VVNG.com)- On Sunday, June 29th a Hesperia resident reported that at between 10 a.m. and 11 a.m. a couple came and purchased some large oil paintings from her yard sale. The suspects were described as an African-American male and female in their early 20’s. The male was approximately 5’8 with a slender build with what she described as small teeth with large gums. The female was approximately 5’6” to 5’7” she was heavier build and was wearing red and black pajama bottoms.

The two parked their dark green older model van described as looking similar to an Astrovan. “They came in like they knew exactly what they wanted. They wanted three oil paintings with beautiful frames saying that they wanted just frames for family photos,” said resident Melissa Hall. The couple engaged in small talk with the seller about  the possible value of these old paintings, which seemed to spark an interest in the male buyer. The female handed her the money out of a small coin purse or wallet that had what looked like a large stack of bills in it. The seller went to get the $55 in change for the $100 bill and the buyers then left in what seemed to be in a hurry.

“It felt soft but looked like real money. I thought maybe it was just washed. It had the strip in it and everything,” said Hall. The bill was later taken to a local Stater Bros. market by her father and was checked, which verified the bill was counterfeit. “ I was heartbroken, felt sick at the same time. I hope that your story will help put the awareness out in the high desert,” added Hall.

The oil paintings sold to the couple using the counterfeit $100 bill.

This was not the first incidence of this happening locally, Victor Valley resident Jessica Camargo shared that on June 25th, similar happened to her after getting change from the Dollar Tree store in Apple Valley.  She had received change for a $100 bill and when she went to make a bank deposit, which included the change, she was told one of her $20 bills was a counterfeit. Camargo reported the incident with the police but never got a return call for more information or to retrieve the bill. Victor Valley News member, Marlo Martin Speitel commented, “The same thing happened to me yesterday at the Circle K at Kiowa and Bear Valley Rd. I paid with a $100.00 bill and got back change including what I found out was a counterfeit $10.00 bill.”

According to the Federal Reserve the best way to confirm authenticity of a bill is to check for the security features which are there for this purpose. Do not simply rely on counterfeit detection pens may give false results. Receiving a counterfeit bill will cause you to lose the face value of the bill since the money is not exchangeable and it is illegal to use a counterfeit bill.  If you receive a bill that you feel is counterfeit call the police immediately giving them any identifying information about the person who gave you the bill. To find out more about identifying markings of currency see:
https://www.newmoney.gov/