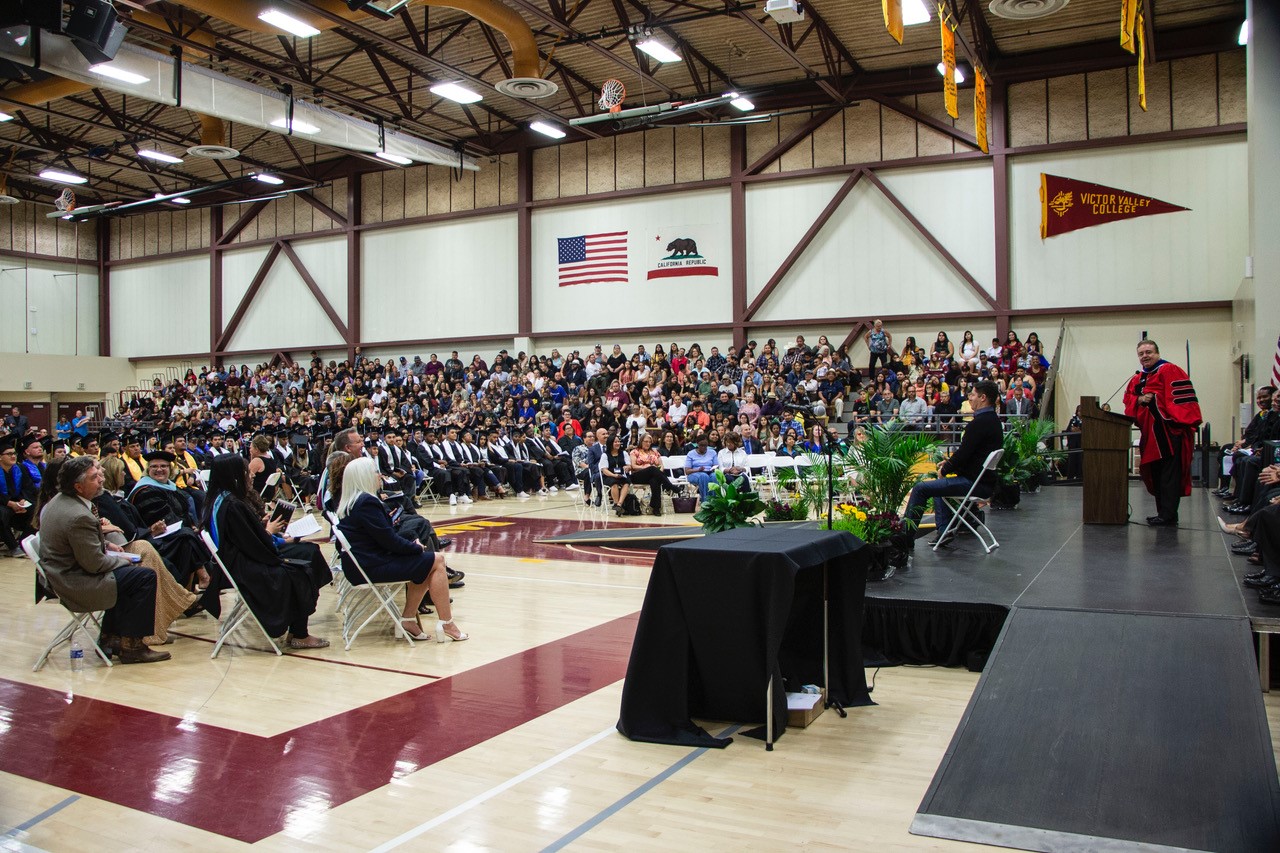 VICTORVILLE, Calif. — During the only event of its kind in the High Desert, hundreds of adult education graduates from local high school districts were honored with a collective ceremony at Victor Valley College on Friday.

“In making the decision to complete your high school diploma or equivalency, you have opened up doors to a whole world of opportunities,” Maphumulo said. “Many of our students are transitioning to Victor Valley College to attain a certificate or associate degree.”

Hesperia Career & Adult Education Center graduate Jessica Ontiveros-Becerra is one such student who is currently enrolled at VVC, taking the first steps toward her childhood dream of becoming a registered nurse.

“To my fellow graduates: I feel an overwhelming amount of pride resonating from every one of you,” Ontiveros-Becerra said. “School offered us the second chance we needed. They treated us with respect and kindness … They wanted me to succeed, they wanted you to succeed.”

Maphumulo asked all the graduates enrolled in community college to stand to be acknowledged, along with those who’ve gotten a job as a result of the program, those who became U.S. citizens while enrolled, and those who are parents and/or grandparents.

Johnny Holguin, a Victor Valley Adult Education graduate, shared part of his story with the crowd, explaining that he is a single father raising two daughters while working full-time and studying at Barstow Community College.

“Today we all gather together here because of a common choice we all made to finish what we started,” Holguin said. “I’ve watched young mothers study with a book in one hand and a baby in the other, young men with a gleam in their eye knowing that this is their first step into a larger world, and men and women who, like me, made a life-changing decision to get this done and better themselves.”

Another graduating parent, Angel Almanza, attended Apple Valley Adult School along with his wife, one of three married couples to participate in this year’s commencement.

“Graduation is not an end goal in itself — it is instead a part of a larger journey in our life,” Almanza said. “Wherever your future takes you, let it take you somewhere.”

There were also three sets of brother and sister siblings among the graduates this year, including Hugo Rosales, who said his younger sister was a major inspiration to him as he attended Apple Valley Adult School with her.

“For years, our way of everyday life is just work, work, work,” Rosales said. “Now it’s time to stop this traditional way and take initiative in challenging ourselves and making a decision to do the most important thing in life: To get an education.”

Commencement speaker Senator Scott Wilk shared a few more interesting facts about the Class of 2019, including that among them were two cancer survivors, one blind student, and one deaf student. The oldest graduate, he said, was 83 years old.

Wilk, 60, also shared his own story about coming to his desired career later in life, despite it being discouraged by others along the way.

“Having heard the stories from the graduates, we already know that today’s achievements came because of your discipline, your commitment, and frankly, your courage,” Wilk said. “I encourage you to pursue life with purpose, passion, and perseverance. It’s never too late to press on.”