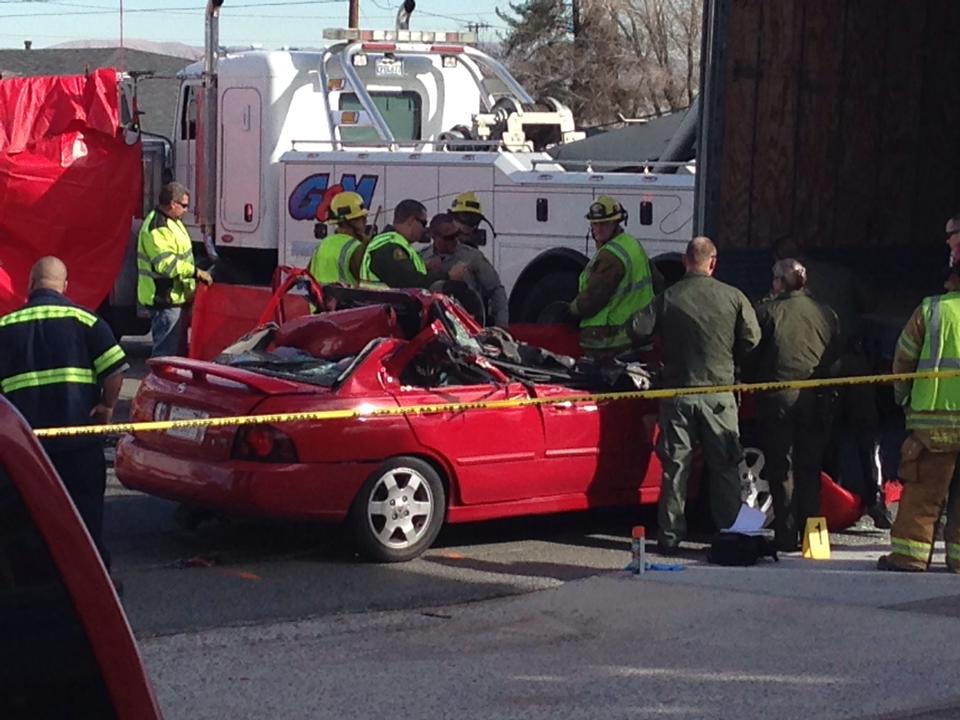 On December 10, 2013 at about 8:20 a.m., Deputies from the Hesperia Station along with rescue personnel from the San Bernardino County Fire Department responded to a report of a two vehicle traffic collision in the area of Main Street and Fifth Avenue in Hesperia.

It was reported that a red Nissan Sentra had rear ended a big rig truck trailer in the eastbound lanes of Main Street. Witnesses reported the vehicle was underneath the trailer and the driver of the passenger car was possibly deceased.  Deputies and rescue personnel arrived and the female driver Jennifer Elliot was found to be trapped in her vehicle. Elliot was pronounced deceased at the scene from major injuries sustained in the impact.

The Hesperia Station Major Accident Investigation Team (MAIT) responded to conduct the investigation. It was determined that the driver of the big rig, (2006 Freightliner, towing a 53’ box trailer) had stopped his vehicle on the curb line in the east bound lanes of Main Street just before Fifth Avenue and exited the vehicle. Elliot, who was driving east in the number 2 lane of traffic, rear ended the parked trailer portion of the big rig. The impact forced Elliot’s vehicle under the trailer killing her instantly.

This loving caring mother just lost her life, she was an INCREDIBLE MOTHER to her girls! Her girls will now have no father or mother, just each other. This mother made an impact on MANY lives of others, especially mine. I’ve had the privilege to know this beautiful family, and I cannot believe this tragedy is happening!!!! May you rest in peace my BEAUTIFUL friend, I love you!”

Main Street was closed in both directions for several hours while

rescue personnel lifted the trailer and extricated the victim from her severely damaged vehicle. The collision is still under investigation by the Hesperia Station MAIT Investigators.