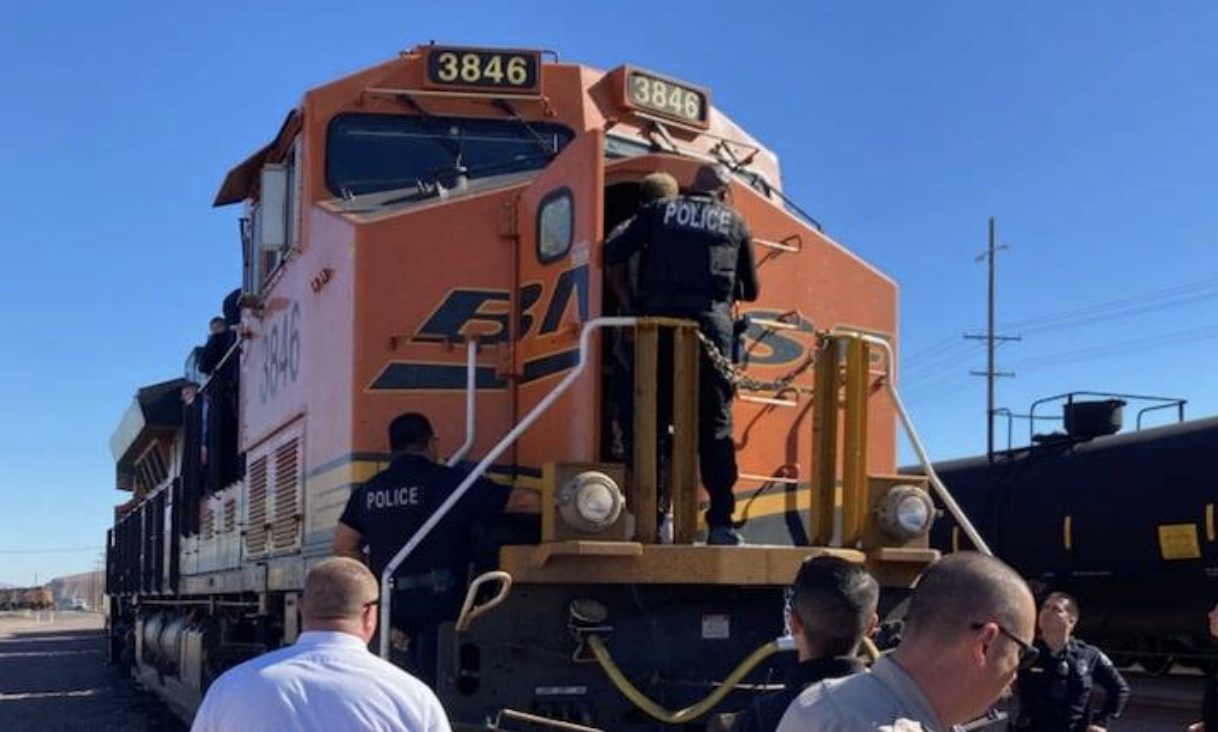 BARSTOW, Calif. (VVNG.com) — A suspect who drove the wrong way on the I-15 and stole several vehicles was arrested after barricading himself inside a train.

On Thursday, November 4, 2021, at approximately 10:34: a.m., Barstow Police Dispatch Center received a call from the California Highway Patrol regarding a wrong-way driver on the freeway.

The vehicle was described as a red Volkswagen Jetta traveling northbound in the southbound traffic lanes. The vehicle was last seen exiting Lenwood Road.

At approximately 10:54 a.m., Officer Andrew Hollister with the Barstow Police Department located the red Jetta at the Love’s Travel Stop in the 2900 block of Lenwood Road. While on scene, a male flagged him down and told him that the man driving the red Jetta just stole his vehicle. He described the vehicle as a tan Nissan Altima.

At that approximate same time, the California Highway Patrol broadcasted that they located the stolen tan Nissan Altima on the Northbound I15 Freeway at L Street and that a black male adult wearing gray shirt and black shorts fled westbound from the vehicle.

At approximately 10:57 a.m., Barstow Police Dispatch received a call of a male subject matching the description of the vehicle theft suspect at the Artic Glacier Premium Ice store in 2500 block of Solar Way. The employee calling reported that the male was now attempting to steal one of the business service trucks.

Barstow Police Officers and members of the California Highway Patrol arrived at the location and began searching for the suspect but were unable to locate him. At approximately 11:27 a.m., officers learned that a male subject matching the description of the vehicle theft suspect, was now on Burlington Northern Santa Fe (BNSF) property in one of their railroad cars.

Officers responded to the BNSF yard and contacted several employees who reported and that an unknown male ran inside of locomotive #3846. The employees described the subject and the description matched the vehicle theft suspect. As officers set a perimeter around the car they observed a male hiding inside the train car.

At approximately 11:34 a.m., Barstow Police Officers, Burlington Norther Santa Fe Police Officers, and CHP officers, including the CHP K-9 unit, attempted contact with the male in the locomotive. The male barricaded himself in the front portion of the locomotive for approximately 10 minutes before he surrendered to officers without further incident.

Gonzalez was booked at the San Bernardino County Sheriff’s Department Jail in Adelanto, CA. for VC 10851(a) – Vehicle Theft and for an outstanding felony warrant for PC 245 – Assault with a Deadly Weapon.

Anyone with information regarding this investigation is asked to contact Officer Andrew Hollister or Officer Austin Jaramillo at (760) 256-2211. Those wishing to remain anonymous may also report criminal activity by calling the WE-TIP hotline at 1-800-79-CRIME (27469) or www.wetip.com.