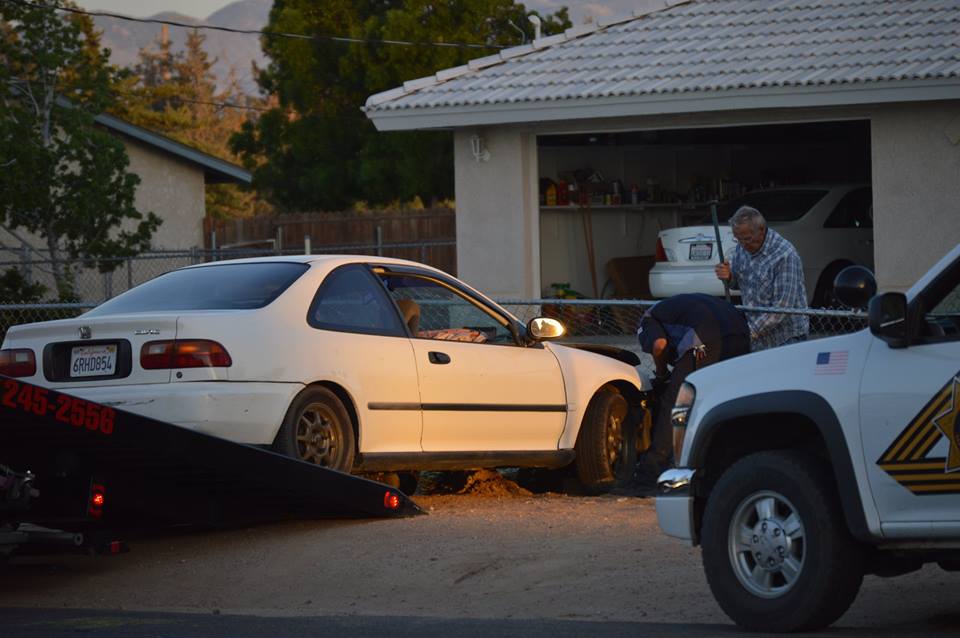 HESPERIA:(VVNG.com)- On Sunday, May 3, 2015 dispatch received a call reporting a vehicle had crashed into a fence along the 15600 block of Muscatel street near Eighth Ave.

The driver of the white Honda ran from the scene of the accident and after a brief search was located by an officer on Sixth just north of Muscatel.

The driver of the vehicle, later identified as 21-year-old Raymond Maciel of Hesperia,  was arrested and taken into custody on suspicion of driving under the influence.

The homeowner, Warren Jones told our Victor Valley News reporter, cars have crashed into his home 11 times in the 10 years that he’s been living there. The last time a vehicle crashed into his fence was just a month ago. Mr. Jones has had to endure thousands of dollars in repairs out of his own pocket. “When my grandkids come over they’re afraid to sleep in the front bedroom because they feel someone might come crashing through the wall.”

He has taken several measures to keep him and his family safe. The homeowner installed several large boulders in his front yard as a way to help prevent people from driving into his home. Jones says, that the city will not allow him to move the boulders to the outside of the fence line.

Victor Valley News reporters have contacted the city of Hesperia and at this time are awaiting a response regarding what they have done or intending to do in order to assist Jones in keeping his property and family safe.

Raymond Maciel, was cited and released on charges for the hit and run and DUI for a person under 21 years of age, since he was 20 years of age at the time of the incident. There are no court dates scheduled at this time.

No injuries were reported as a result of the crash.