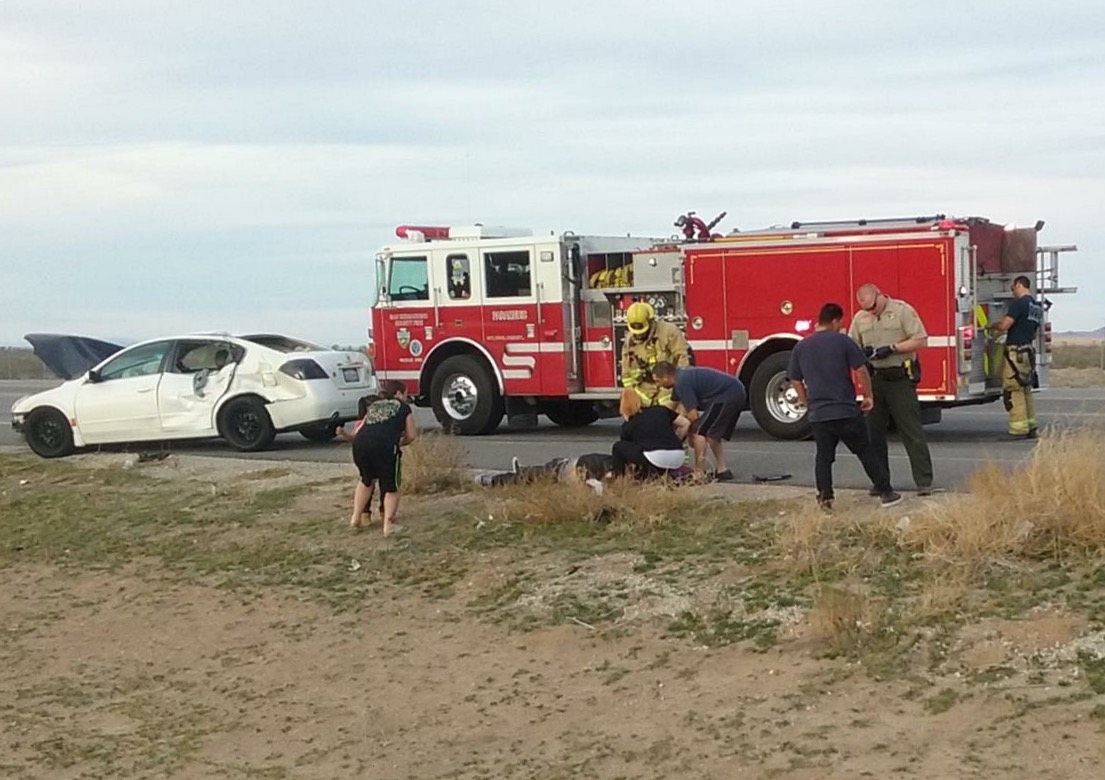 ADELANTO CALIF: (VVNG.com)- A portion of US Highway 395 in Adelanto was shut down for several hours after a call reporting a traffic collision with multiple injuries 4:24 P.M. Sunday, February 28th, 2016. Initial reports to 911 indicated that people were ejected from a vehicle. Witnesses reported that one male victim was lying on the roadway and another was lying in a ditch.

Upon arrival at the scene, at the intersection of Highway 395 and Chamberlaine Way, deputies located a white Nissan sedan and a Gold GMC Yukon both with major front-end damage as a result of the collision.

Through investigation, deputies were able to determine that the collision involved a white Nissan Maxima that was driving northbound on US Highway 395 hitting two crossing pedestrians. The GMC Yukon was driving west on Chamberlaine Way and stopped at the red light on US Highway 395.

For unknown reasons the two vehicles collided in the intersection, after the two collided the Nissan Maxima struck two pedestrians that were attempting to cross Highway 395 in the crosswalk.

According to San Bernardino County Fire Department Public Information officer, Jeff Allen, the two teen males were crossing Highway 395 when they were hit by the vehicle.  One of the teens sustained serious life-threatening injuries while the other teen suffered serious injuries not believed to be life-threatening. Both teens were airlifted for treatment.

At this time, the cause of the accident will be determined by the San Bernardino County Sheriff’s Department Major Accident Investigation Team (M.A.I.T). The closure is expected to remain until at least midnight.

Anyone who may have witnessed this collision is urged to contact Deputy Sahagun or Deputy Haynes at the Victor Valley Station.