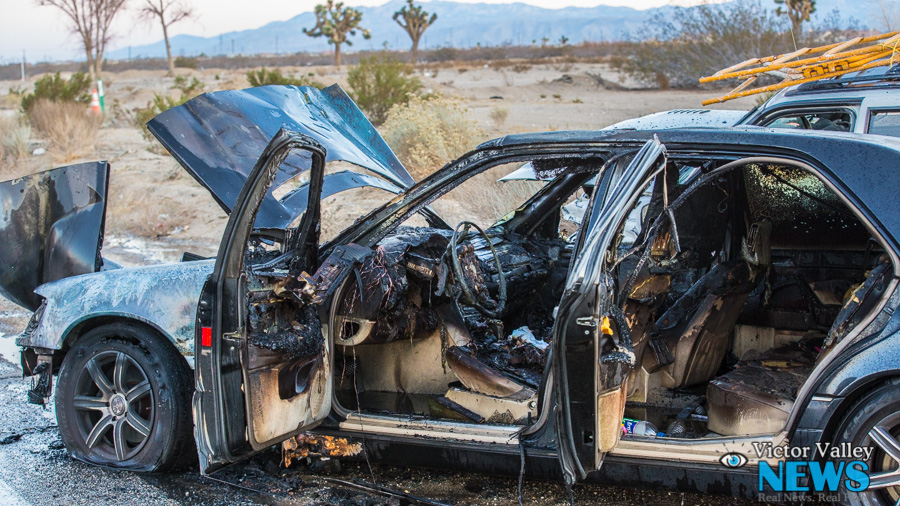 ADELANTO, Calif.(VVNG.com)– A 21-year-old Apple Valley man is thankful to be alive following a crash that caused his vehicle to erupt into flames Saturday evening.

At about 4:10 p.m. dispatch received reports of a traffic collision with fire on Palmdale Road between Bellflower Street and Pearmain Street in Adelanto.

When authorities arrived, they located a 1997 Mercedes-Benz engulfed with flames and a 1998 Jeep Grand Cherokee. Both vehicles were along the dirt shoulder along the eastbound side of Palmdale Road.

The driver of the Mercedes, Ayrick Mcallister, told Victor Valley News he was traveling eastbound on Palmdale Road when a black truck tried to pull in front of him.

As he veered in attempted to avoid hitting the truck, his vehicle spun out. The Jeep was traveling westbound when it collided with his car.

Moments after exiting his Mercedes-Benz, the car erupted into flames. San Bernardino County Fire arrived and extinguished the vehicle fire.

The driver and passenger of the Jeep were transported to a local hospital with non-life threatening injuries.

The official cause of the collision remains under investigation. 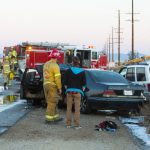 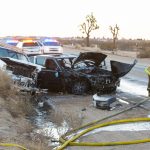 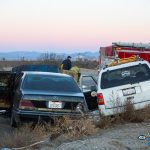