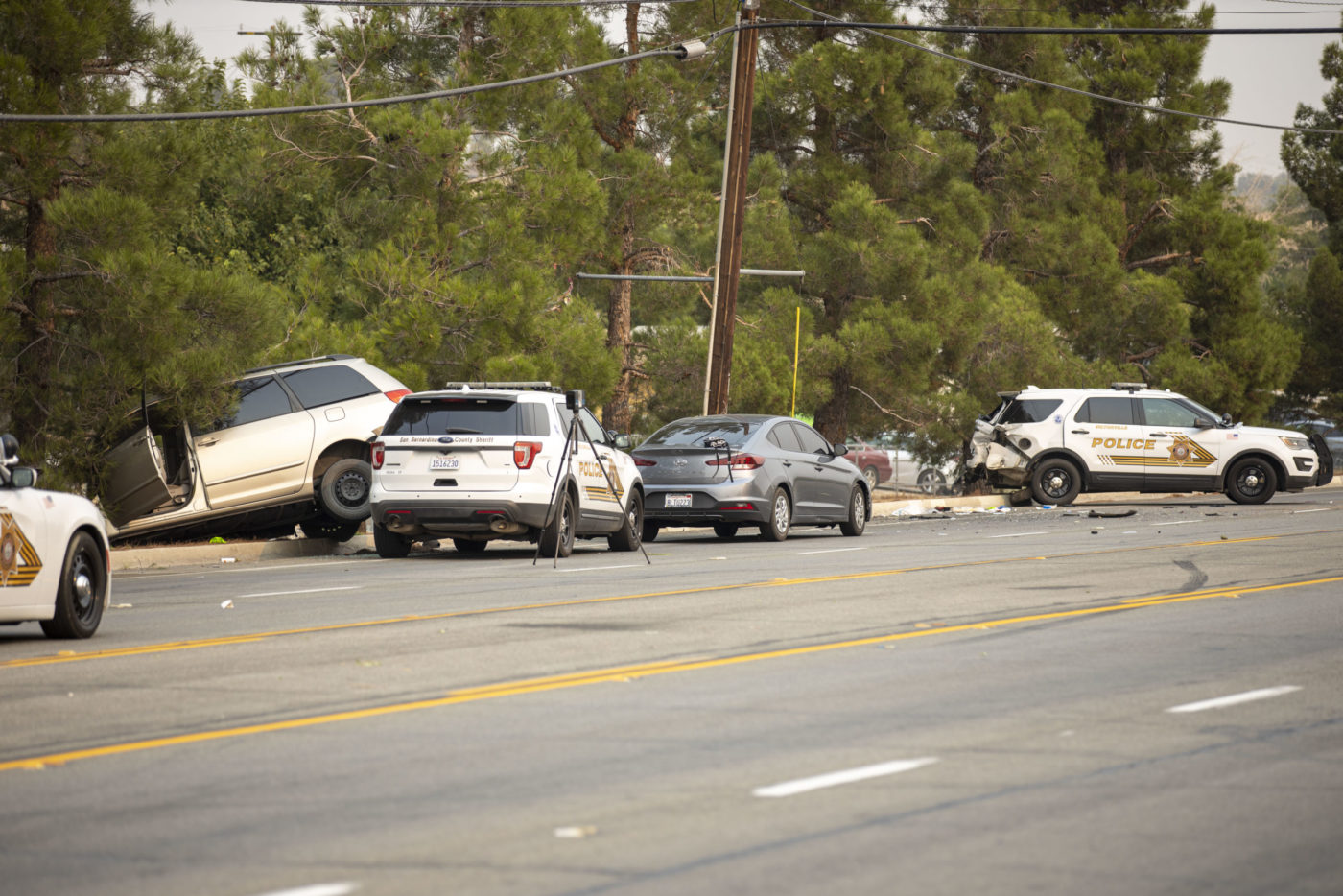 VICTORVILLE, Calif. (VVNG.com) — A stretch of Hesperia Road was shut down on the morning of Labor Day Monday for a multi-vehicle crash that involved two Victorville Police patrol vehicles.

It happened at 3:26 a.m., September 7, 2020, on Hesperia Road between Hughes and Seneca Roads in Victorville.

The Toyota left the west side of the roadway striking a tree causing it to partially lift and hit the second marked patrol car.

It all started when the driver of a reported stolen Hyundai led police on a pursuit in the area of La Mesa Road and Amethyst Road at about 3:20 a.m.

The pursuit ended when the Hyundai stopped in the no. 2 lane of southbound Hesperia Road facing the wrong way. Five occupants foot-bailed, three suspects were detained and two suspects fled.

Deputies were out of their vehicle conducting a stolen vehicle investigation when a gold colored Toyota Sienna van traveling southbound on Hesperia Road collided into the rear passenger side of a patrol car that was blocking the no.2 southbound lane on Hesperia Road.

The driver of the van, identified as William Thomas Black, 51, a resident of Victorville, continued south and struck the open door of the Hyundai.

A 42-year-old, White male adult, sitting in the back of the first patrol unit sustained major injuries and was airlifted to a trauma hospital. An update on his condition was not available.

In addition, a 29-year old, Hispanic female adult and a 50-year old Hispanic male were sitting in the back of the second patrol car when the collision occurred. Both occupants including the driver of the van were all transported to local hospitals for complaint of pain.

The driver of the van and the two other occupants from the 2nd patrol were transported to Victor Valley Global Medical Center for complaint of pain.

Hesperia Road and Outer Hesperia Road was shut down for an investigation between Hughes and Seneca Roads for over 6 hours.

The collision is under investigation by the San Bernardino County Region II Major Accident Investigation Team (M.A.I.T.). Sheriff’s officials said it is still unknown if drugs and/or alcohol was a factor in this collision. Anyone with information is asked to contact Deputy Scott Lafond at 760-241-2911 and reference case #17200871.