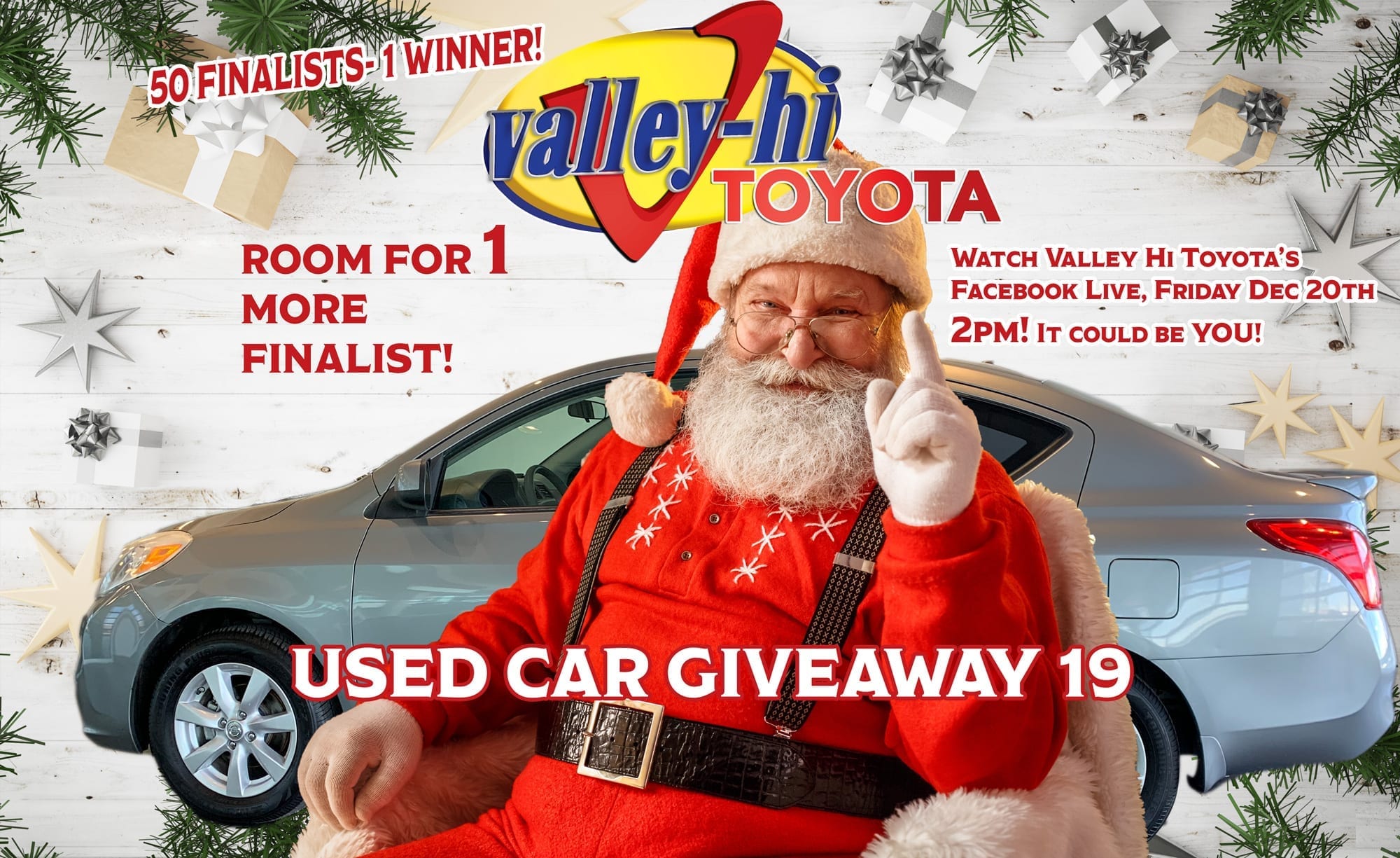 VICTORVILLE, Calif. (VVNG.com) — ’Tis the season for giving away cars? Well, at least for Valley Hi Toyota in Victorville.

For the past 6 years, the Toyota dealership has given away 18 vehicles, December 20th will be number 19. Five years in a row it has been right before Christmas. “We plan these to get everyone in the Holiday spirit,” said General Manager Todd Stokes. “So much bad new goes on, we want to bring to and excitement for the best of the year.”

Forty-Nine finalists are already selected, but because of a goof, someone watching today on Valley Hi Toyota’s Facebook Live feed will become the 50th and final finalist. “I accidentally typed in the same person twice, and someone pointed it out. We had 49 instead of 50, so I thought why not reward someone who will be watching the day we give the car away,” said Brian Ortega, Creative Director at Valley Hi Toyota.

The dealership usually begins a Used Car Giveaway contest every 1,000 Facebook Likes, but decided to proceed to keep in time with the season. “We were hovering about 18,500 since the Summer when we gave the last car away (Toyota Sienna to Cheryl Glenn), but Likes is not that important in the Social Media world anymore,” continued Ortega. Valley Hi Toyota finally reached 19,000 Likes two days ago.

The vehicle for Used Car Giveaway 19 is a 2013 Nissan Versa with 86,000 miles. Illustrious Auto Detailing is donating a free wash and detail to winner. Cool Ray Glass Tinting is donating free tinting, and Magic Dent Repair will be removing all the dents and dings. Discounts will be offered to those watching the Live broadcast at 2pm on the Valley Hi Toyota Facebook Page.

“We are super excited to bring anticipation and a good time to the High Desert. One lucky person will win a new-to-you car for Christmas,” said Stokes.

Tune in Live December 20th at 2pm on the Valley Hi Toyota Facebook Page. Join the fun Valley Hi Toyota Friends Page. Watch previous winners and commercials on theYoutube page. Be sure to follow @valleyhitoyota, @vhtoyotaparts, and @vhtoyotaservice on Instagram for more giveaways, contests, and news about Toyota products.

Toyotathon is on right now during the Valley Hi Toyota Year End Sales Event. Used cars as low as $6,995 and deals on remaining 2019 new Toyotas. As much as $2,700 off 2020 Toyota Tacoma and lease a 2020 Corolla for as low as $99 per mo. Valley Hi Toyota is located in Victorville, across the street from Costco.  Help the Toyota dealership get to 20,000 Likes for Used Car Giveaway 20!