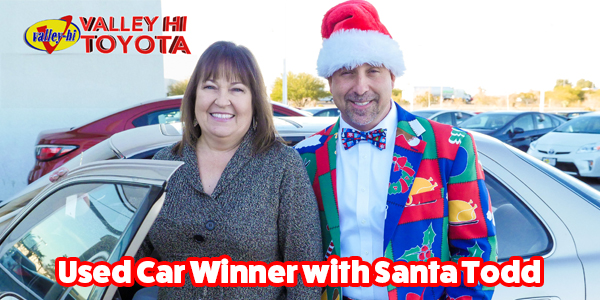 VICTORVILLE:(VVNG.com)- 2015 has been a tumultuous year. Yet at the same time it has been filled with atrocities and negativity. News comes and goes in a flash which leaves us little time to celebrate a triumph or mourn a tragedy. “We wanted to end the year with positivity.” says Valley Hi Toyota General Manager Todd Stokes, “I understand we’re just a car dealership in the High Desert, but we could at least make a difference in our community this holiday season.”

World Premiere of our Music Video, ♪♫♪♫ “Sale Phone Bling.” We really enjoy being your community dealership and wanted…

Valley Hi Toyota has just posted the 5th used car winner in a year, 11th in two years. “The contest has become a staple in the Victor Valley,” says Brian Ortega, Social Media Marketing Manager at the Victorville dealership. “With each contest we’ve gained more entries each time. This month we had over 3300 entries, and with people earning more by sharing, it just keeps spreading.” Valley Hi Toyota just announced Lisa Burkart of Apple Valley as Used Car Giveaway Winner #11, which concludes the contest this year.

Burkart, who was caller number 12 when “Santa Todd” and Brian held a live “call-in” ( contest, radio-style, decided to pay-if-forward and give the Toyota Camry to her daughter, Kristen Curran. “I’ve been without a car for almost a year so now this means I don’t have to borrow mom’s ‘Swagger wagon,” Curran jokes. Lisa Burkart shared the contest with all of her friends and family on Facebook , Twitter, & Instagram. “I’m a cool mom, I’m all over social media!”

Valley Hi Toyota also donated numerous toys and funding as part of the “Christmas Miracle” project put on by Non-Profit On the Rise Inc. and the High Desert Scikotics Car Club in Barstow. “We’ve put on a car show with the HDScikotics and felt privileged when they asked if we could participate in a surprise Christmas celebration for a local family,” says Evelyn Brown, Customer Relations Manager.

Finally, as a treat to everyone, a few members of the sales team, Marcus “MAC” Castro, Olivier “Olivi-yeah” Qualo, and Andrew “DJ whiteAL” Lear formed a group and created a parody of Drake’s hip-hop hit, “Hotline Bling,” called “Sale Phone Bling” (#salephonebling). “When they played the song for me I told them we have to make a music video!”, said Ortega. “We worked during our off hours to film all over the High Desert about the song encouraging everyone to shop local and not go ‘down the hill’ to consider buying their next Toyota.” Castro continues, “I’m native to the High Desert, and I understand it was difficult in the past to do business up here… but we want everyone to visit the dealership and let us take care of you like family.”

Valley Hi Toyota invites everyone to follow them on Twitter and Instagram , as well as Like them on Facebook. There is information about car tips, contests, giveaways, and the latest on when the dealership will begin construction on their new building. The Toyota/Scion dealership will temporarily move into the dealership previously occupied by Mistubushi next door. Toyotathon is still on new inventory. Preowned vehicles are also on sale now. Who knows? Maybe in 2016 they will continue the Used Car Giveaway.