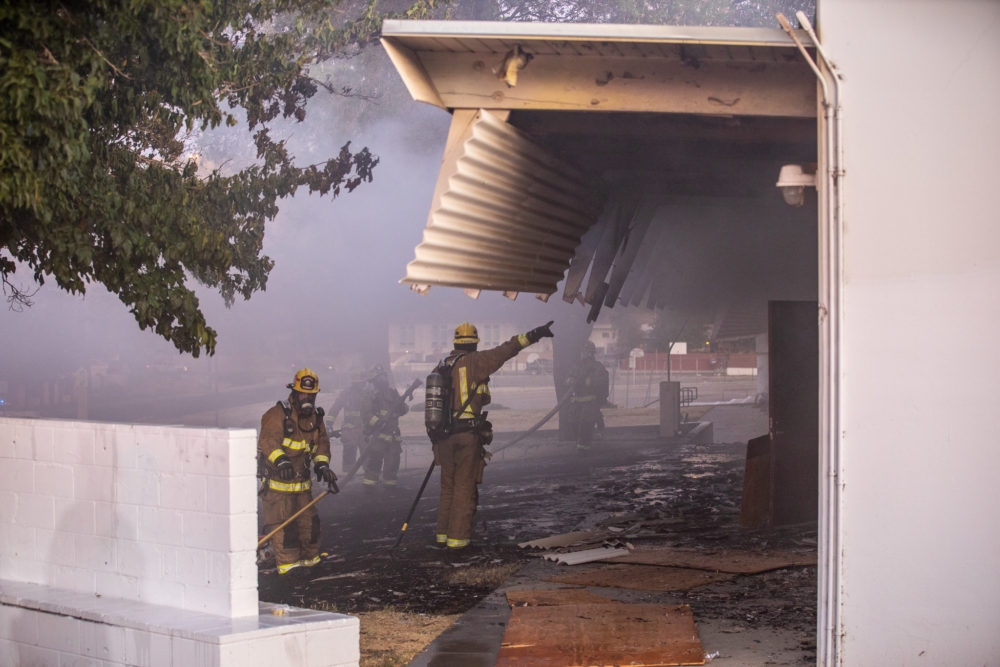 VICTORVILLE, Calif. (VVNG.com) — For the second time in less than a year, a vacant school frequented by homeless people in old town Victorville, caught fire.

Emergency personnel responding to the call about 6:30 p.m. found heavy smoke and fire coming from the structure located on the south-west corner of 7th and Forrest Avenue.

Victorville City Firefighters coordinated a defensive attack and made their way onto the roof to attack the fire. Firefighters from the Apple Valley Fire Protection District responded to assist.

Fire crews were able to extinguish the blaze in about 20 minutes, however, firefighters remained committed to the incident for a couple of hours.

The school’s gymnasium, part of the original Victor Valley High School built in 1937 and later designated as a local historic point of interest, also caught fire in late December 2018.

Due to the 2018 fire, the Victor Valley Union High School District made plans to demolish the historic building, but those plans are still being worked out.

“This is sad. This was the site of Victorville’s first high school. My dad was Class of ‘46 and my 2 uncles before him also graduated from there,” stated Kandis Silvestri.

Over the years, the influx of transients in the Old Town Victorville area occupying vacant buildings has led to several fires.

Claudia Hill said she believes the fires will continue if the city doesn’t address the homeless population. “We have to take care of the homeless,” Hill stated. “There wouldn’t be this problem, otherwise you will expect lots more.”

At this time the official cause of the fire is under investigation.